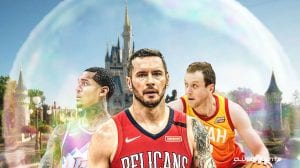 The NBA is finalizing its Return to Play format as 22 teams will travel to Orlando in July to finish off the 2019-20 NBA season and crown a new champion.  COVID-19 has changed the dynamics of this year’s playoffs as players return to the sport underconditioned, worried about safety, and understandably focused on social issues rather than basketball.

Before the suspension of the regular season, teams like the Milwaukee Bucks and the Los Angeles Lakers were favorites for the title.  But now that the rules have changed and new factors are thrown into the equation, are some teams better equipped than others as the NBA enters the bubble?

Here is a look at ten things to look at, and how your team measures up as the NBA moves forward.

Alan Tapley
Alan Tapley is an educator, author, and blogger who has lived just outside of Boulder for the last twenty years.  His published work includes two novels, two children’s books, a series of cartoons in the Minneapolis Star-Tribune, and multiple sports related articles. His love for family and the state of Colorado is only matched by one thing, his passion for sports.  The first baseball game he ever attended was at Wrigley Field, before there were lights.  At the final Bronco game at the old Mile High, he allegedly cut out a piece of his seat in the South stands.  But regardless of being here for the Avalanche’s last Stanley Cup, the Rockies only World Series appearance, and all the Broncos’ Super Bowl Victories, his wife never fails to remind him that he wasn’t at the University of Colorado in 1990, like she was.  The year the Buffs football team won the National Championship.
Tagged: Adam Silvercovid 19Denver NuggetsDisney WorldDwight HowardKyrie IrvingLos Angeles LakersNBANikola JokicOrlando