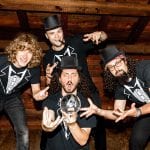 The Ogden has announced another fire lineup next weekend guaranteed to get you your funk fix. Pigeons Playing Ping Pong is headlining September 15th and 16th, bringing the best of both coasts with them. They’ll be joined by Lespecial on Friday night for a late-night groove fest. Saturday night will be a dance party of epic proportions with Portland’s Yak Attack. Pigeons Playing Ping Pong is a four-piece funk/jam band from Baltimore, Maryland. Hatched in a dorm room in 2009, they’ve spent the last decade racking up over a thousand shows in 44 states. Propelled by a relentless work... Read More