Posts Tagged With ‘ Volunteer and Community ’ 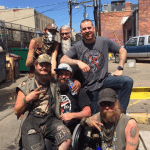 A safe space is never guaranteed, but Jordan Robinson has been trying to make that idea a reality. Jordan and his father, Doyle “Sox” Robinson, have been working at Sox Place for roughly 16 years. The idea for the center began in 2002 when Doyle gave out socks to those in need, coining him the nickname. The father and son believed there was a lack of resources available to unreached youth living on the streets of Denver. Children, as young as 10, were either out of foster care, too young for adult shelters or runaways. Dangers of human trafficking, being attacked and drugs are also factors... Read More

Tagged: Faces of DenverhomelessVolunteer and Community