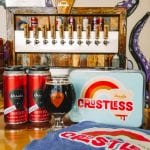 Tucked in an unsuspecting little suburb outside of Denver, sits a stellar brewery with a fabulous reputation, that’s only matched by its ability to roll with the punches. More about that later. Ursula Brewery has been a staple of the Fitzsimons neighborhood and it’s safe to say: it’s a favorite of many! Back in 2014 they opened their doors under the name Coda Brewing. With the unique mission of pairing beer and music. After the owners, Scott Procop and Luke Smith, parted ways in early 2016 – Ursula Brewery emerged! Both the guitar pick background and the Fender-esque font of their current... Read More