Posts Tagged With ‘ the velveteers ’ 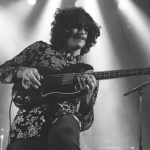 John Demitro has been playing music around the Denver area since he was a child. He and his sisters started picking up instruments before high school and gradually started playing together as they grew up. Originally, he was in a band with his sister, Lulu, as the Branded Bandits and eventually took on the title of Pink Fuzz. He played drums for both bands before joining forces with Demi in The Velveteers. It isn’t often that you see a family of musicians working together but John believes that working with family is better because he can count on his sisters being brutally honest during the... Read More