Posts Tagged With ‘ The Mowgli’s ’ 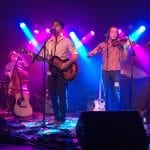 Next weekend is going to be huge for the Denver music scene in general. UMS is going to be insane, but that’s not all that’s going down. Maybe huge festivals aren’t really your jam. Maybe winding your way through ten thousand other concertgoers cramps your style. Totally understandable. If you’re looking to see some live music but avoid the South Broadway mayhem next weekend, Globe Hall has you covered. On Saturday, July 26th, Channel 93.3 presents The Mowgli’s, Petal, and Arms Akimbo on their Summer Vacation Tour. The Mowgli’s began in 2010 in L.A. They hit... Read More