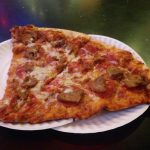 I started writing this piece with the idea that I would talk about late-night, post-show eats in Denver. As I wrote, I realized that I was writing specifically about pizza by the slice. As I wrote even more, it became clear that I was really just venting about my sex life. It would seem that I have f***ed my way through every after-hours pizza joint in the Queen City. Here is the short list of pizzerias and what I have to say about them and the men I explored along the way. There’s a lot of hot slices here. The Pie Hole wins straight away for “Best Name.” It’s on South Broadway and is a... Read More