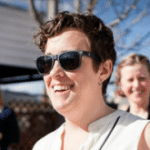 One team in the Denver craft beer scene is hoping to prove the possibilities of what a small business can do to give back. Betsy Lay and the rest of the group at Lady Justice Brewing focus on bringing women to the forefront of the beer scene. Lady Justice Brewing was started in 2014 by co-founders Betsy Lay, Kate Power and Jen Cuesta. Originally, they began as a Kickstarter to start the all female brew team, which donates their proceeds to community organizations supporting women. “There are more female brewers on the scene now and I think momentum is there. There’s still sexism and harassment... Read More