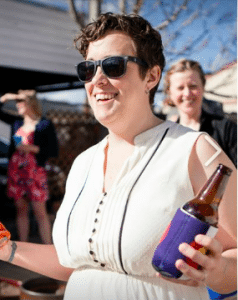 One team in the Denver craft beer scene is hoping to prove the possibilities of what a small business can do to give back. Betsy Lay and the rest of the group at Lady Justice Brewing focus on bringing women to the forefront of the beer scene. Lady Justice Brewing was started in 2014 by co-founders Betsy Lay, Kate Power and Jen Cuesta. Originally, they began as a Kickstarter to start the all female brew team, which donates their proceeds to community organizations supporting women.

“There are more female brewers on the scene now and I think momentum is there. There’s still sexism and harassment at breweries and events but I think that, more and more, women are feeling like they have a place and can learn the craft.” Betsy said.

Betsy got interested in beer first, as most people, by drinking it. Once craft beer became a bigger scene, she started experimenting with different styles of beer. Lady Justice Brewing was born after Betsy started brewing with her friends and eventually that became all they did with their time. At the beginning, they were brewing in a space the size of a tool shed, now they have a brewing partnership with Factotum Brewery so they can work there and have their own featured taps.

The ladies brew mostly classic American and English styles. In the summer they focus on pale ales and are now working on a saison with fresh sage. Some other beers they have put out this summer are the Deconstruction SMaSH Pale Ale and the Lemon Hibiscus Hefeweizen.

Betsy is a fan of tinkering with styles that aren’t as common and hopes to try brewing a Brut IPA in the future.

What sets Lady Justice Brewing apart from many breweries is that the proceeds from their beers go into stock and to their grant program. Each year they give out grants to local organizations which support girls and women in various 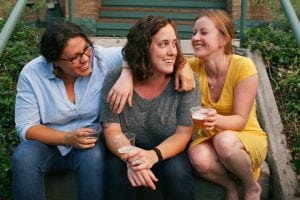 areas, such as elevateHER, which focuses on youth wilderness training for girls. They also give out individual youth grants for girls, ages 11-17, that want to empower themselves and their community. Applications are opened in March and announced in April.

This mission to support the community is a focus that Betsy notices in a lot of the beer scene in Colorado. She believes that this collaborative and community oriented mentality is why brewing in Denver is special.

To learn more about how you can become a community brewer member, support the ladies brewing or the tasty beers check out: http://www.ladyjusticebrewing.com

Helen Kuhn
Helen Kuhn is a writer hailing from the east coast. She moved to Colorado in 2015 to finish getting her Bachelor degree in English at the University of Colorado. Before making the move to Denver she interned with the Daily Camera in Boulder and with Philadelphia Weekly. She spends her times slinging drinks for work and writing poetry for fun. When she isn't writing or messing around on the keys at open mics her passion for beer has led her to finding some of the most delicious breweries around the city. She can't wait to explore more and share her love for Colorado.
Tagged: Denverfactotum breweryIPAlady justice brewingpale alesphilanthropicpride month