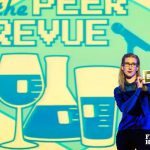 I’ve done stand-up comedy for years. One of my favorite jokes used to be that I was single because I spent all of my spare time in comedy club green rooms, where the choice of men was not enticing, the social skills and economic prowess of unknown comics being what they are. I’ve found a show with stunning difference in the population of the performers. It’s called the Peer Revue and it’s made of scientists and STEM-field professionals who have taken a crash course in comedy writing and who then jump up onstage to do stand-up on their topic of expertise. Instead of hearing comedy about... Read More