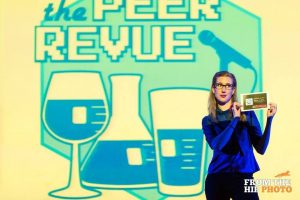 I’ve done stand-up comedy for years. One of my favorite jokes used to be that I was single because I spent all of my spare time in comedy club green rooms, where the choice of men was not enticing, the social skills and economic prowess of unknown comics being what they are. I’ve found a show with stunning difference in the population of the performers. It’s called the Peer Revue and it’s made of scientists and STEM-field professionals who have taken a crash course in comedy writing and who then jump up onstage to do stand-up on their topic of expertise. Instead of hearing comedy about food, sex, and airports, you get jokes about gene splicing, archaeology digs, quantum mechanics, and robotics engineering. I can’t speak to the improved social skills of engineers relative to comics.

I was pretty skeptical the first time I heard about the Peer Revue. Who wants to hear a bunch of bumbling lab rats telling jokes? But I was curious enough to try to get a ticket. It was sold out. What? When the show returned a few months later, I bought my ticket on the first day and showed up with both anticipation and trepidation. The show was…delightful. And that’s coming from a trained scientist and a comedy snob. 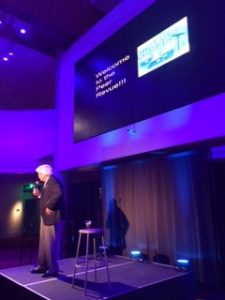 I love the art and performance of stand-up, the careful and exact construction and execution that seem effortless when done well and excruciating when done poorly. But it can be a bit disappointing when the content is vapid or impersonal. The Peer Revue changes that game by making the content sharply relevant. We are all affected by, say, smartphone technology or genetic disposition to disease. The performers’ delivery can be a little shaky at times (after all, these are scientists, not seasoned public speakers), but that adds to the charm. And even as a comedy snob, I will honestly attest that all of the performers had genuinely funny sets. Some of them were genuinely hilarious. I laughed long, hard, and often throughout the entire show. I laughed so hard that I signed up to join the next workshop. (That’s me in the photo–I loved the program so much that I stayed onboard with it!) 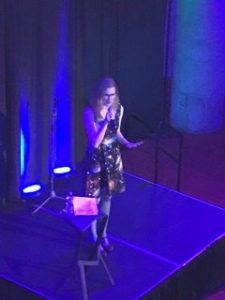 know the dark underbelly and unspoken secrets of science and technology. Have you ever wondered how they decide “how close is close enough” when aiming a nuclear weapon? The Peer Revue answered that unthought-of question for me. How do you study the possibility of life on Mars? By investigating glacier farts on earth, the Peer Revue informs me. Why did I never know that glaciers fart?

Science Riot, the non-profit that organizes the Peer Revue show, has a mission statement of “Promoting Public Enthusiasm for Science.” They are currently recruiting participants for their 2018 shows, if you have a STEM background and would like to hone your public speaking skills while doing some community outreach. If you just want to see a damn funny and totally original comedy show, check out their next event on February 18 at the Clocktower Cabaret.

The Clocktower is “The Coolest Room in Town” and even when the Peer Revue isn’t playing, they put on a great show. They’re known for headlining some of the hottest burlesque on the Front Range, but they do a lot more than just that. They’re also a great venue for variety, circus and sideshow, and live music. The late-night offerings are edgy and adult, but they also book family-friendly shows at earlier times.

The Cabaret is tucked into the basement of the Daniels & Fisher Clocktower and it’s a glorious plunge into a magic world where you look a bit more attractive, your OKCUpid date seems a bit more interesting, and the music sounds a bit more melodious. It’s like Photoshop for your entire evening and that’s before you start making your way through the cocktail menu. (I recommend their Classic Martini, although the Honey Hot Toddy is also lovely in winter.) Many people walk by the Clocktower and vaguely know about the Cabaret; if you’re one of these folks, I encourage you to step inside and check out a show. You won’t be disappointed.

This next week is a busy one. Valentine’s Day (also Ash Wednesday; don’t even try to figure that out) rides in hot on the heels of Mardi Gras. If you need a bit of comic relief and a stiff drink after all that, head down to the Clocktower and take in the show. I’ll be there, Martini in hand, recuperating from the last week and learning something new for the next. (Glacier farts?! Yes! They’re a real thing!)

Jessie Hanson
Jessie Hanson lives and works in Denver and couldn't be happier about it. Like the best-possible kind of Jekyl-and-Hyde scenario, she splits her life between science and storytelling. During the day, she performs clinical diagnostics and messes around with test tubes. At night, she performs behind the mic as a standup comedienne, in the air as a circus aerialist, and in rhinestones as burlesque dancer. She begrudges the hyper-inflated cost of a decent pair of false eyelashes. When she's not on stage, she sweating it out as an endurance athlete in triathlons and marathons across the West. She begrudges the hyper-inflated cost of a decent pair of running shoes. She's thrilled to be on board with OnDenver and writing about science, comedy, circus, athletics, and general fun on the Front Range!
Tagged: daniels & fisher clocktowerDenverpeer revuestand upworkshops