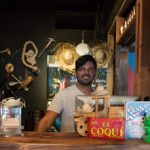 Meet Alex Rivera, originally from Isabela, a small town in the Northwest coast of Puerto Rico. After attending his brother’s wedding in Denver in 1998, he decided to move out here himself in April of 1999.  Six months later, he was a self-employed contractor accomplishing mostly residential remodels.  Back in 2011, Alex and his wife Diana, started a part-time Puerto Rican food truck business in Lakewood but after a few months they decided to call it quits, “we were just testing the waters and it was going pretty well, but again, back then I was still doing construction, I... Read More