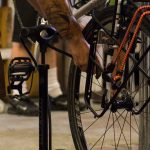 A cyclist in the city of Denver can end up paying more for parts to fix a bike than the bike itself cost. Andrew Thomas, Park Hill General Manager at Bikes Together, and his team want to bring the freedom of cycling back to the people at prices they can afford. Thomas has always had fascination with bikes but when he was younger he was typically stuck in a location where cars were dominant and fixing a bike at a pro shop came at a steep cost. Once Thomas moved to Denver in 2004, he developed his skills in cycling and mechanics with people who shared his interest in a DIY approach to maintaining... Read More