A cyclist in the city of Denver can end up paying more for parts to fix a bike than the bike itself cost. Andrew Thomas, Park Hill General Manager at Bikes Together, and his team want to bring the freedom of cycling back to the people at prices they can afford. 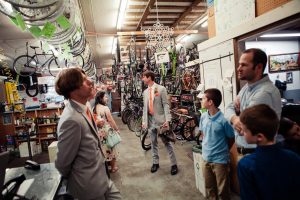 Thomas has always had fascination with bikes but when he was younger he was typically stuck in a location where cars were dominant and fixing a bike at a pro shop came at a steep cost. Once Thomas moved to Denver in 2004, he developed his skills in cycling and mechanics with people who shared his interest in a DIY approach to maintaining bikes and generating community.

“It wasn’t until I found the Derailer Bicycle Collective that I learned a ton and it really took off. They are some amazing people, and showed me a lot, and for free, as long as I paid it forward. So I did.” Thomas said.

Thomas took the techniques he learned working with the Derailer Bicycle Collective and used them when he got involved with Bikes Together, originally called The Bike Depot. As he was scrolling through craigslist in 2010 he noticed a post by The Bike Depot about the nonprofit’s mission and accessibility to used parts and tools. He quickly went from a customer to a volunteer in teaching classes and wrenching. In 2015, he joined the nonprofit’s Park Hill staff.

Bikes Together receives their supply through individual donations, bike drives, other community organizations and bike shops. The shop has an extensive volunteer list but there is a core group of volunteers and staff that can always be reached there regularly. Additionally, the bike spot offers a handful of services outside of their retail shop which include Fix Your Bike free space, youth bike programs and specialized classes. During the summer Bike Camp the Bikes Together team takes children cycling around the city and spark their interest for mechanics, solving problems and

community service. Refurbished bikes are given out to children and adults for free through their Bike Rodeo and Earn a Bike programs. The nonprofit keeps an inclusive and community building agenda through the GEM, Gender Equality Mechanics, courses and the Tunes and Brews happy hours.

“I think we are relevant to others across all ends of the socioeconomic spectrum. Everyone from supporters and donors, to customers, to programs participants and volunteers find us useful, and we have found that people typically don’t fit into just one category. The more engaged people become, the better time they have and more people they meet.” Thomas said.

Outside of Bikes Together, Thomas navigates the city on his bike and frequents the Sand Creek Trail area to check out the progress made for cyclers. When he and his wife travel to the mountains they are big fans of forested singletrack rides and exploring Nederland. His current dream is to construct his own frame in the classic steel bike fashion from a recycled frame.

The shop continually welcomes new volunteers and donations. This winter, Thomas hopes to put together a Frozen Fingers ride around Denver and will host the Stuart’s Famous Wheel Building class in the Spring. The shop will also be organizing its big 10-year Anniversary Party in the new year.

To talk more with Andrew Thomas or learn about the shop locations, volunteering and donations visit bikestogether.org

Helen Kuhn
Helen Kuhn is a writer hailing from the east coast. She moved to Colorado in 2015 to finish getting her Bachelor degree in English at the University of Colorado. Before making the move to Denver she interned with the Daily Camera in Boulder and with Philadelphia Weekly. She spends her times slinging drinks for work and writing poetry for fun. When she isn't writing or messing around on the keys at open mics her passion for beer has led her to finding some of the most delicious breweries around the city. She can't wait to explore more and share her love for Colorado.
Tagged: bikesBikesTogethercyclingdiydonationshealthMechanicsNon-profitPark HillToolsyouth