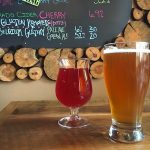 Coming from Southern California, my daily commute was an hour twenty minutes. Even a short drive to the beach or at the wrong time of day or on a weekend could take over an hour. And let’s not even get into traffic in the major cities. In other words, in California, you get used to being in your car. A lot. It still amazes me that in the few years I’ve lived in Denver, that idea that an hour or two (or even four- Vegas, anyone?) drive is really nothing, has totally faded and I’m now a spoiled girl in a little-big city and joined everyone in bitching if I had to drive more than... Read More