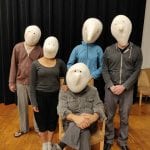 I’ve never had much truck with communism. I was born in the 80’s and have only the faintest memory of the Berlin Wall coming down. My ultra-Conservative scholastic education impressed upon me that the only success of the Soviets and the “Red Chinese” (yes, that was the actual term used) was to slaughter and starve millions of people. This impression was not wrong; Stalin and Mao weren’t fun people at parties. And it left me with a deep distrust of anything labeled “The People’s,” whether that’s an army or an industry. Thus, it was with some skepticism that I learned that there’s... Read More