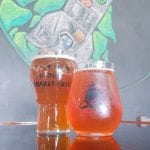 In Aurora off the corner of Kentucky and Buckley tucked back behind the 7-Eleven lies an amazing hidden gem – Launch Pad Brewery. Open seven days a week this “rocket-themed microbrewery and taproom” (as Google states) is decked out in all sorts of aeronautics gear including several scale models of satellites and rockets. Their small taproom boasts a decent amount of seating and is indeed dog and child friendly. The staff here is exceptional! Having frequented Launch Pad Brewery over the past few years (primarily due to its close proximity to Community College of Aurora); I was hooked. All... Read More