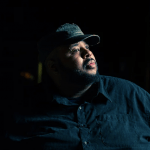 Justen Howard has become a staple in Denver music, especially at open mic nights around the city. He moved to Colorado from Manhattan roughly five years ago to start a studio and be involved in a budding music scene. Before moving West, he learned to play a variety of instruments, starting with the saxophone he picked up at the age of four. From there he learned how to play piano, guitar, drums, mandolin and more. As he grew up he understood that at times he would need to learn how to play certain instruments in order to get the songs he wrote finished All Chiefs is Justen’s current band which... Read More