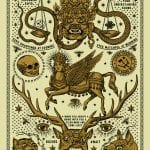 Continuing his exploration of spiritual and mythical characters from cultures across the world, Ravi Zupa has released the third print in his Tattoo series featuring Buraq from the Islamic tradition and a buddhist version of Mahakala. At the top, we see Mahakala—a fierce, chaotic form of Shiva (husband of Kali) who plays a significant role in Tibetan Buddhism. Like his wife, he is a symbol of time and thus is bound by no rules or structures of morality comprehensible by the human mind. “Facing Mahakala is the most alarming and frightening event in the life of any consciousness,” Zupa says... Read More