Posts Tagged With ‘ Game of Thrones ’ 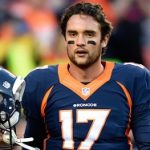