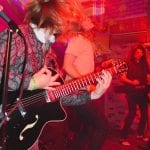 Globe Hall is an awesome restaurant and music venue in RiNo. The historic red brick building has always been home to various taverns and the like. In 2015, Globe Hall moved in and began selling out shows, hosting a huge variety of touring and local acts. The well-worn bar has as much character as the bands that take the stage and the award winning Texas-style BBQ goes great with the cheap drinks. Saturday, September 28th, Globe Hall welcomes the Ryan Montbleau Band and Grayson Erhard. Montbleau began playing shows in his hometown of Boston in the early 2000s, quickly working his way up from coffee... Read More