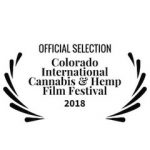 Prepare for Hollyweed as the Colorado International Cannabis & Hemp Film Festival premieres in Denver! Hosted by Infinite Perimeter, the film fest is a 4 day event during 4/20 week. The festival will be showcasing filmmakers who “promote generally positive messages related to cannabis and hemp.” Starting Tuesday, April 17th, and ending with a final celebratory get together on Friday, April 20th (4/20), this event is one of several cannabis and hemp themed film festivals to be premiered in Colorado. I am excited to be one of the judges reviewing the submissions. There have been over 61 so... Read More