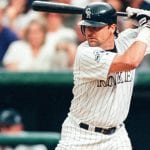 As the final votes were tallied for this year’s Hall-of-Fame and the results confirmed, only two major league baseball players would be going to Cooperstown: New York Yankee great Derek Jeter and Colorado’s own Larry Walker. Both could be called a surprise. The selection of Derek Jeter in his first year of eligibility wasn’t too shocking considering his 20-year career as a Yankee in which he appeared in 14 All-Star games, won five gold-gloves, and won five World Series. The surprise was that the selection wasn’t unanimous as Jeter received 396 out of 397 votes, meaning one sportswriter... Read More