Posts Tagged With ‘ denver his ’ 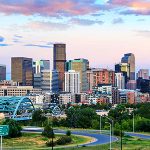 If you’ve heard it once, you’ve probably heard it a dozens times — Denver is a changing city. This is because there has been a huge influx of people into our city in the last five years with the legalization of marijuana in 2012, and whether these new Coloradans moved here to enjoy the benefits of marijuana itself, or to engage with our growing economy, the fact is the Denver Metropolitan population now has a growth rate of 1.6%. This places it as one of the fastest growing areas in the nation. It also means major changes have subsequently occured — as happens to any city when... Read More