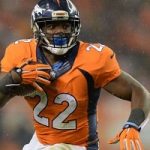 Last week, former Denver Bronco running back Terrell Davis was inducted into the NFL Hall-of-Fame. In his speech, he reminded the crowd of his unlikely rise to greatness that included transferring to the University of Georgia after his initial school cancelled its football program, being drafted in the sixth-round by the Broncos as a long shot to make the team, and only getting the chance to play running back after proving himself on special teams. Call it perseverance, great scouting, or pure luck, but the 2017 Broncos may need all three in the upcoming season based on their questionable depth... Read More