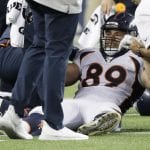 After watching last Monday’s preseason game between the Denver Broncos and the San Francisco 49ers, three things became quite apparent: our starting defense looks pretty good, our starting offense needs a little work, and the team lacks some serious depth. Preseason football is basically meaningless, as most coaches only play their starting units for a handful of series, fearful of injuries that could derail the regular season. Which got me to thinking as the 49ers steamrolled through Denver’s backups in the second half. Who can the Broncos least afford to get injured this season? Joe Flacco... Read More 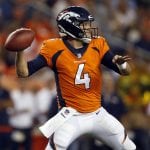 Three preseason games may not be enough to fully judge the Broncos 2018-2019 season, but here’s the report card as we get close to kick-off. Quarterback Grade C+ – To be fair, compared to last year’s debacle in which Trevor Siemian, Paxton Lynch, and Brock Osweiler combined to throw just 19 TDs versus 22 INTs, Case Keenum looks like an A+ upgrade.  But the jury is still out whether Keenum is the same QB that threw 22 TDs and only 7 picks with the Vikes in 2017, rather than the QB he was all the previous years.  A veteran backup is probably needed, but if Keenum goes down does it really... Read More 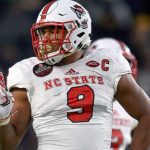