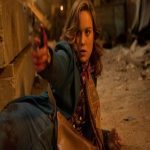 Let’s get something out of the way first. Despite being a strong supporter of responsible gun control, I absolutely love gunfights in movies. From John Woo’s acrobatic bullet ballets like Hard Boiled to the urban warfare in Heat, if a director can stage an action sequence involving firepower in a creative and compelling way, I’m so there. That’s where it gets tricky, isn’t it? How many gunfights have we seen in movies? Thousands. How many do you remember? That’s why, if you’re going to have folks blasting away at each other in your film, you’d... Read More