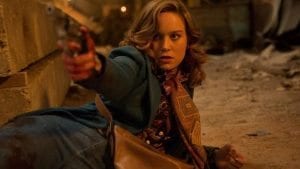 Let’s get something out of the way first. Despite being a strong supporter of responsible gun control, I absolutely love gunfights in movies. From John Woo’s acrobatic bullet ballets like Hard Boiled to the urban warfare in Heat, if a director can stage an action sequence involving firepower in a creative and compelling way, I’m so there.

That’s where it gets tricky, isn’t it? How many gunfights have we seen in movies? Thousands. How many do you remember? That’s why, if you’re going to have folks blasting away at each other in your film, you’d better make it memorable. Once in a while, we get that. The lethal efficiency in John Wick. Firearms being used tactically in The Way of the Gun. The absolutely bananas lobby shootout in The Matrix.

Now here’s the flip side of that equation. Having some cool gunplay is fine, but you need to also make sure you’ve got compelling characters. We need to care about the protagonist, be worried about what the antagonist is going to do. Otherwise, we just have a bunch of ciphers shooting at each other. The bad news is, that’s pretty much exactly what we get in Ben Wheatley’s newest film Free Fire.

We’re dropped into an abandoned warehouse in Boston during the 1970’s, where an arms deal is getting ready to go down. The folks who want the guns are mostly members of the Irish Republican Army. Their leader is Chris (Cillian Murphy), a stone-cold professional who just wants to get his weaponry and scoot. His second-in-command is Frank (Michael Smiley), an older IRA soldier perpetually annoyed by nearly everyone else. Backing them up are Stevo (Sam Riley) and Bernie (Enzo Cilenti), a couple of lowlife knuckleheads.

The folks who have the guns are Vernon (Sharlto Copley), playing an annoying pain in the ass. Again. His number two is Ord (Armie Hammer), a wryly sarcastic guy who never quite takes the deal seriously. Martin (Babou Ceesay) is there to keep Vernon from doing or saying anything idiotic, while Harry (Jack Reynor) and Gordon (Noah Taylor) are there as underlings. Justine (Brie Larson) is the mediator who has brought these highly combustible groups together.

Ideally, the deal should be simple and brief. But Vernon has brought the wrong weapons, then there’s a beef that needs settling between two characters. Sprinkled atop all of that is a bunch of unnecessary alpha-male posturing, and tensions are ratcheting up before everyone has even fully arrived.

Then there’s a long gunfight. Then the movie ends. Yes, really.

Let me make another confession. Every film nerd has their blind spots, where they haven’t explored certain genres or filmmakers. Ben Wheatley is one of mine. He’s a director that some folks love passionately, with films like High-Rise or A Field in England. Free Fire is, I suspect, not the right film of his to start with.* He got the idea for this film from an FBI case in Miami in the 1980’s, where a number of participants in close quarters got into a cartoonishly long gun battle.

That’s one of the extremely clever aspects of this film. You’ve got a group of (mostly) competent people exchanging fire, taking a shot to the leg here, a bullet to the shoulder there, and slowly being whittled down while taking cover behind abandoned equipment. We never see examples of champion marksmanship. As a matter of fact, most of the rounds fired off don’t end up hitting anybody. It turns out shooting somebody is really hard! On top of that, the sound design on this film is absolutely aces. Each weapon has its own distinctive report. Initially, the gunfire is extremely loud, but as time goes on, it quiets down. As the characters gradually become deafened, Wheatley lets us share the experience.

So why don’t I love this film, being that it should be right up my alley? Wheatley co-wrote the script with his wife Amy Jump, and instead of fleshed out characters, we’ve got walking attitudes. We know the IRA members want the weaponry to presumably launch an attack. Where? Why? What’s their endgame? Sharlto Copley’s Vernon is a walking joke. Does everybody else know he’s a joke? Does he, and he’s overcompensating? Having said that, the screenplay is sporadically amusing, and I love the concept that as the only woman present, Justine is the most cool-headed and professional person there. But a serious opportunity was missed to drill down into how male dick-swinging can turn something easy into a total disaster.

Despite the two-dimensional characters, Wheatley’s cast is solidly pretty good, and everybody seems to be enjoying themselves. More than anyone else, Sharlto Copley chews enormous amounts of scenery playing a motormouthed dingbat.** He’s amusing and he tap-dances just up to the line of becoming irritating. Armie Hammer hasn’t quite captured film stardom just yet, and that’s a pity. You’ve seen him as the Winklevoss twins in The Social Network, and in Guy Ritchie’s remake of The Man from U.N.C.L.E., and as the title character in The Lone Ranger.*** As Ord, he’s all snark, and he gets most of the best moments. Unsurprisingly, Brie Larson is the real standout, and we get the feeling that her Justine is comfortable with handling the fragile male ego on a regular basis.

Is Free Fire worth seeing? Eh, I guess so. While I suspect I’ll gain far more appreciation for Ben Wheatley’s gifts as a filmmaker by checking out his other movies, this film feels like a director making a movie on a lark. I can feel that he’s talented by how he stages scenes and edits them. Wheatley is no idiot, but Free Fire is a tale all about sound and fury, signifying nothing.

*Just like if you want to dive into the work of Michael Mann, you don’t start with Blackhat.

**I’m shocked that Sharlto Copley hasn’t been cast in a Tarantino film yet. I would literally sell my only child to see him share extended screentime with Samuel L. Jackson and Christoph Walz.

Tim Brennan
Tim has been alarmingly enthusiastic about movies ever since childhood. He grew up in Boulder and, foolishly, left Colorado to study Communications in Washington State. Making matters worse, he moved to Connecticut after meeting his too-good-for-him wife. Drawn by the Rockies and a mild climate, he triumphantly returned and settled down back in Boulder County. He's written numerous screenplays, loves hiking, and embarrassed himself in front of Samuel L. Jackson. True story.
Tagged: amy jumparmie hammerbabou ceesayben wheatleybrie larsoncillian murphyfree firemichael smileysharlto copley