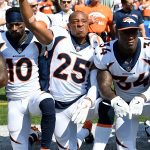 The Sunday pre-game was a little different as I found my seat before the Broncos-Raiders match up. The national anthem was about to begin and all eyes were fixated on the sidelines. Would the players and teams continue to take a knee in a unified effort to protest the inequality that exists in our society, the unfair treatment of others based on race, gender, sexual orientation, and social status? And would the crowd erupt in boos to show their disappointment at the millionaire football players who disrespect the flag, the sport, the country, and even our US Military? This game featured neither... Read More