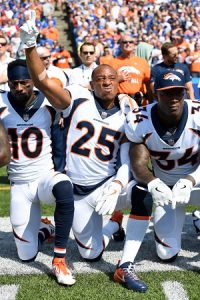 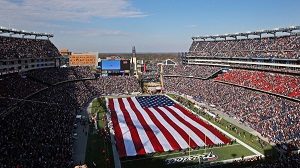 The Sunday pre-game was a little different as I found my seat before the Broncos-Raiders match up. The national anthem was about to begin and all eyes were fixated on the sidelines. Would the players and teams continue to take a knee in a unified effort to protest the inequality that exists in our society, the unfair treatment of others based on race, gender, sexual orientation, and social status? And would the crowd erupt in boos to show their disappointment at the millionaire football players who disrespect the flag, the sport, the country, and even our US Military? This game featured neither as the players joined hands, but stood, while the fans stayed quiet. But the debate continues.

For those players that take a knee and the millions that support them, you are not wrong. Our Nation’s 1st Amendment rights protects you to stand up for, or take a knee for, issues that need attention in our society. No one can deny that our country’s treatment of African Americans historically has been an embarrassment. Slavery, segregation, human rights, police brutality, the fact is that racism is still prevalent in our society. Women’s rights have been obstructed throughout our history as the country still struggles with equal pay, fair treatment, and equal rights in a Nation that didn’t allow women to vote until 1920, almost 150 years after the Declaration of Independence was signed. Protesting, and providing a voice for all races, genders, and social injustices has been a part of our fabric forever, and have come with gathering of support, as well as angry resistance.

Jackie Robinson broke the color barrier when he signed with the Brooklyn Dodgers back in 1947. He played through death threats, racial taunts, and persevered in a time when segregated hotels, bathrooms, and restaurants were commonplace.

“But as I write these words now I cannot stand and sing the national anthem. I have learned that I remain a black in a white world.” Jackie Robinson once wrote.

It should be noted that Robinson served in WWII as a 2nd Lieutenant.

Tommy Smith and John Carlos finished with a gold and bronze medal in the 1968 Summer Olympics. Taking the podium after the 200-meter dash, both raised their black-gloved fists as the anthem played and gave the Black Power salute. The two athletes also removed their shoes, covered up the USA logo on their uniforms, and wore beads to protest inequality, racism, poverty, lynchings, and the slow pace in which the country was dealing with these important issues.

Smith and Carlos were booed loudly, asked to leave the Olympic Stadium, sent home, and were eventually suspended from the US track team. 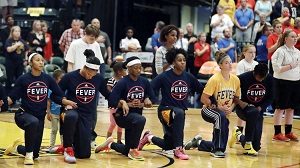 Sports and protest have existed throughout American history. Billie Jean King threatened to boycott the 1973 US Open in a fight for equal pay, which indirectly helped lead to Title IX. The Indiana Fever of the WNBA all took a knee a year ago, and protests have occurred in the NHL, MLB, Soccer, and multiple other sporting venues. Muhammad Ali was once sentenced to five years in prison for his refusal to join the US Army and serve in Vietnam. An unpopular move that was based on Ali’s religious beliefs as well as the country’s treatment of people of color.

“If I thought the war was going to bring freedom and equality to twenty-two million of my people, they wouldn’t have to draft me. I’d join tomorrow.”

The kneeling during the flag is not a statement to disrespect the country or the military. It simply represents a peaceful protest, discussion, and awareness that the country still has some work to do.

But what about the boo-birds and the millions that support them? They’re not wrong either. In a country where you have the right of free speech, don’t some fans have the right to disagree with the form in which a protest takes place? No one is booing the causes for which the athletes are protesting. They are booing the process in which the athletes chose to make their statement. The flag and the national anthem represent many things, including patriotism, respect, and honor. One could argue that if kneeing down for the Anthem was planned to simply start the conversation, like blocking a freeway with protesters, it has been successful. But if the message is clouded, and misinterpreted by others in its execution, the players and the NFL have a problem.

Did Colin Kaepernick and others make a mistake in including the flag and anthem in their protest, whether planned or not? Potentially. But the bigger problem is that society is so determined to take sides these days that nothing is getting accomplished, and no one is working together. Take a knee and you’re anti-American. Boo the players and you don’t believe in the 1st Amendment, or deny inequality exists.

Instead of finding a side, how about we focus on finding solutions.

Alan Tapley
Alan Tapley is an educator, author, and blogger who has lived just outside of Boulder for the last twenty years.  His published work includes two novels, two children’s books, a series of cartoons in the Minneapolis Star-Tribune, and multiple sports related articles. His love for family and the state of Colorado is only matched by one thing, his passion for sports.  The first baseball game he ever attended was at Wrigley Field, before there were lights.  At the final Bronco game at the old Mile High, he allegedly cut out a piece of his seat in the South stands.  But regardless of being here for the Avalanche’s last Stanley Cup, the Rockies only World Series appearance, and all the Broncos’ Super Bowl Victories, his wife never fails to remind him that he wasn’t at the University of Colorado in 1990, like she was.  The year the Buffs football team won the National Championship.
Tagged: 1968 OlympicsBillie Jean KingBrooklyn DodgersChris HarrisColin Kaepernickfirst amendmentflagIndiana FeverJackie RobinsonJohn CarlosMLBmuhammad aliNFLprotestTommy Smith