Too many movies take their time when they don’t really need to. For example, I read recently that the upcoming Avengers: Infinity War has a running time of two hours and thirty-six minutes. If you’re a fan of the MCU, that’s probably fine and dandy news. If you’re a casual filmgoer, nearly three hours of superhero shenanigans just might make you want to head for a desolate mountain cave and embrace a life as a hermit.

I get it, a story is ultimately as long as it needs to be. Only that’s not always correct. I can think of a few movies I’ve seen over the last couple months that could have stood with some trimming. For one, Star Wars: The Last Jedi could have lost 10 minutes or so with no ill effects. They say in screenwriting you need to kill your darlings, get rid of all but the most essential elements for the leanest version of the tale.

That’s why when we come across a film that knows its business and wants to move quickly, there is cause for rejoicing. Airplane is one of the funniest films ever made, and it wraps things up within 88 minutes. What We Do in the Shadows gives you a smart and clever mockumentary about vampire roommates in 86 minutes. Blue Ruin has profound things to say about vengeance, and this tight thriller does so in 90 minutes. 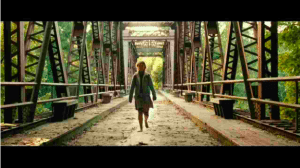 It is, and John Krasinski’s A Quiet Place gives us all that with intelligence, compassion, and loads of style.

We’re dropped into the not-too-distant future, and America has gotten its ass kicked. The country has been overrun by bizarre creatures. These fiendish thingies move fast, they’re heavily armored, and they have hearing that’s absolutely uncanny. That’s a problem, because if you step on a twig, drop a glass, fart too loudly, they’ll hear it and come a-running, and that will be the end of you.

Day 89 of the post-apocalypse has arrived, and the Abbott family is scavenging for supplies in an abandoned pharmacy. I should mention they’re scavenging very quietly, as everyone is communicating via sign language, moving around

We flash forward about a year. The family is still in mourning, but they’ve built something approximating a life at an old farm. Lee has a command center in the basement of the farmhouse. He’s devised a clever surveillance system to make things as safe as possible, and he also researches possible vulnerabilities in the creatures and tries to jury rig a cochlear implant, as Regan has impaired hearing. 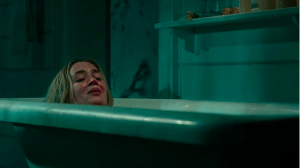 Making matters even more stressful for our beleaguered clan, Evelyn is extremely pregnant. The family has tried to create a soundproof bunker for their impending bundle of joy. But can they stay silent forever when those things are out there, constantly on the hunt, and can hear nearly anything?

I’m aware we’re only in April, but I’m very comfortable with calling A Quiet Place one of the scariest and most effective films of the year. Roger Ebert once wrote, “It’s not what a movie is about, it’s how it is about it.” Here, we’ve got a movie in which a plucky family is menaced by rampaging creatures. There have been approximately 17 million movies made about this kind of thing, but most of them don’t have this level of intelligence.

Krasinski directed, and this is the part where we all marvel at a comedian making a whip-smart horror movie.* Comedy and horror both depend on timing, knowing when to set something up and when to pay it off. Krasinski is very subtle in his setups. He’ll show us a nail protruding from a step and let us know it will be involved in a payoff later.  A lesser film might have a set piece involving alarm clocks or wind chimes or some damn thing, but Krasinski never overdoes it.

He’s also made a film with astonishingly well-done sound design. At a guess, I think there probably aren’t more than 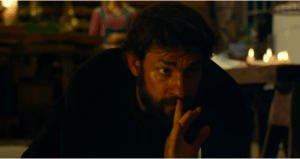 fifty lines of dialogue in this film. Communication happens with sign language, with glances and gestures. Around the near-total silence of our characters, Krasinski’s use of sound is devious. A creak, the tinkle of glass, it’s all used to enhance the constant feeling of tension. These characters aren’t allowed very many mistakes, and they know it.

The script by Krasinski, Scott Beck, and Bryan Woods is lean and efficient. We get a sense of each character, and the script tells us precisely what we need to know. Also, we don’t have any post-apocalyptic superheroes running around here. The family is filled with smart people who behave like normal human beings. I particularly admired the characterization of the kids who act like…well…kids!

With a small cast, Krasinski gives everyone a chance to shine. He’s married in reality to Emily Blunt, and her Evelyn is perceptive and still retains a sly sense of humor. While Evelyn takes steps to empower the children, Krasinski’s Lee is almost like a survivalist where he’s just focused on helping the family survive the next day. Millicent Simmonds has been deaf since infancy, and she helped her fellow actors learn American Sign Language. A smart choice is made with her performance as a loving but defiant teenager. Watch how she signs. It’s fiery, energetic, and her nonverbal performance is more expressive and empathic than many others I could name.

At 90 minutes, A Quiet Place doesn’t believe in wasting time. This film doesn’t screw around, but it’s not brutality for brutality’s sake. Instead, we’ve got a movie that’s smart, scary as hell, and does what it needs to do without overstaying its welcome. Horror is more than jump scares, though there’s quite a bit of that here. It’s about a group of people clustered together in a darkened theater, simultaneously hoping for a good scare and hoping likable characters make it out alive. A Quiet Place delivers all that and more. It’s smart filmmaking that demands to be seen in a theater.

*I read somewhere a quote calling A Quiet Place the Get Out of 2018. I’m not sure about that, because Get Out has more to say and more layers overall, but I get the comparison.

Tim Brennan
Tim has been alarmingly enthusiastic about movies ever since childhood. He grew up in Boulder and, foolishly, left Colorado to study Communications in Washington State. Making matters worse, he moved to Connecticut after meeting his too-good-for-him wife. Drawn by the Rockies and a mild climate, he triumphantly returned and settled down back in Boulder County. He's written numerous screenplays, loves hiking, and embarrassed himself in front of Samuel L. Jackson. True story.
Tagged: a quiet placebryan woodscade woodwardemily bluntjohn krasinskimillicent simmondsnoah jupescott beck