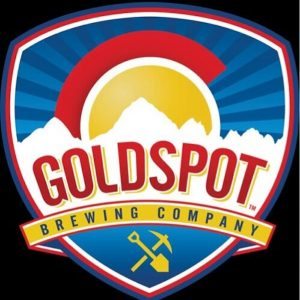 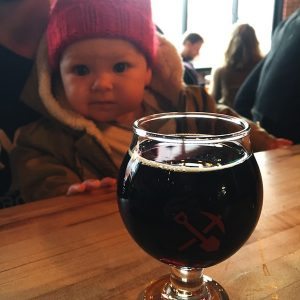 So, it’s the end of May, not that your winter coat would know the difference. While the snow *might* finally be over for the season after this week, we are still guaranteed at least a few more chilly days before we can pack that coat in for a few a months. Such is the unpredictable nature of Colorado weather that keeps us on our toes. Thankfully, there are plenty of breweries to visit when the weather suddenly turns and you’re craving a warming brew in a cozy taproom. Goldspot Brewing on 50th and Lowell gives you just that.

“Born in Berkley,” Goldspot sits in the up-and-coming Berkley neighborhood in North Denver. Saddled just beyond the Highlands in a community maintained by traditional Northwest Denver roots, Goldspot is very much a local, neighborhood brewery. The taproom is relatively small, encouraging patrons to cozy up their elbows at the community table and wrap-around bar. While the mining theme is branded with their logo, it isn’t overwhelming and overall remains neutral, save for a Colorado flag hung on exposed bricks. The beer, simply put, is straightforward and executed without flaw or fireworks. You will find beer true to their styles–despite kitschy names hand drawn on the menu boards. Since it was freezing and snowing, I tried every stout they had on tap and was not disappointed. The Sweet Romance is a lavender honey stout with complex sweetness and herbal qualities, giving a slight taste of Fernet that my pre-mom self surely appreciates. Contrastingly, the Black Whiskey River is a very boozy, 10.2% imperial stout aged in whiskey barrels that left no assumptions. Other beers continued the Denver tradition with tongue-in-cheek names such as The Bees Knees tripel, the Unicorn Floatie strawberry hefeweizen, and a rye pale ale collab with Our Mutual Friend Brewery appropriately named Party Pants. While my snow day was perfectly spent sipping on weather-appropriate dark beers, the floor-to-ceiling garage door and wide variety of all styles of beer on the spectrum make it a perfect spot to have an any-occasion beer, no matter what bipolar weather Denver throws at us.

Goldspot also boasts one of the city’s growing demographics: badass female brewers. Goldspot brewer Kelissa Hieber is one of the many women that have participated in one of the most politically apropos collaboration series in Denver brewing history. The Makin Noise: Pussy Riot beers have been released across the city in participating breweries since the first batch was appropriately released on Trump’s Inauguration Day, with plans to continue releasing new beers throughout October. Now dawning the second batch of the series, Goldspot hosts one of my favorites: a deliciously executed rye stout. Nothing tempts my palette more than a thick, malty, chocolate-heavy stout on a snow day, and this beer pairs perfectly with a late May snow that almost has me missing winter. As all Pussy Riot beers donate a portion of the sales to charity, this beer’s proceeds go to Protect our Winters: a climate advocacy group acting against climate change in the name of winter sports. If that doesn’t scream Colorado, I don’t know what does. Go grab a pint before the weather warms too much and/or Trump gets impeached—whichever much anticipated event comes first.

Also to note, this weekend there is a chance of warmer weather and sunnier skies. If you are heading to Project Pabst in RiNo on Saturday, be sure to check out Ratio Beerworks and Our Mutual Friend Brewery right on Larimer Street. Also happening Saturday in Five Points is the annual Jazz Fest: a free, family-friendly street festival that shuts down Welton Street, happening right outside the doors of Spangalang Brewery, celebrating the Five Points historic jazz district.

Erica Hoffmeister
Erica Hoffmeister earned an MFA degree in creative writing and an MA in English from Chapman University of Orange. She has creative work published in the literary journals Shark Reef, Rat’s Ass Review, Split Lip Magazine, and others. She has been teaching for over a decade (claiming 8th grade as her favorite grade level because she’s an actual crazy person) and currently teaches composition and literature courses for Morgan Community College out of Fort Morgan. Always considering herself a bit of a beer nerd, she met her husband at Our Mutual Friend brewery while on vacation and fell in love with him, Denver, and its beer scene in one fatal swoop. While born and raised in Southern California, don’t worry—she’s earned her spurs as a transplant by creating her very own Colorado native. As a new mom, she is currently renegotiating her role as a world-traveling, bar-hopping, beer-loving free spirit by taking advantage of Denver’s beer culture, where you can find as many babies in breweries on any given afternoon as beers on tap.
Tagged: beerBreweriesColorado Breweriescraft beerDenver