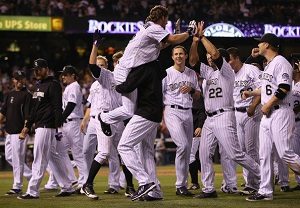 Colorado fans may think it’s a little early to post a headline like this with the Rockies just two games in front of the Milwaukee Brewers in the fight for the final playoff spot. Call it irresponsible journalism, or sensationalism to attract readers, but with twelve games to decide the wildcard, here are six reasons that fans can stop chewing their nails, and start popping champagne.

1) While it doesn’t look great that the Rockies end the season with six games on the road and three at home against the first-place Los Angeles Dodgers, the schedule does include the San Francisco Giants, San Diego Padres, and Miami Marlins, all struggling teams.

2) The St. Louis Cardinals are only 4 ½ back, but they follow a nine-game road trip with four games against the division-leading Chicago Cubs, and finish the season against the other wildcard challenger, the Milwaukee Brewers. Despite the extra motivation of Scott Rolen Bobblehead night on Sept. 30, the series could be tough.

3) The Dodgers only reason to care against the Rockies in the last three games of the season is if the Washington Nationals are challenging them for the best record in baseball. The Dodgers are struggling, but they’ll have it clinched by the time they come to town. LA will rest Clayton Kershaw, Yu Darvish, and any other pitcher necessary to set up their playoff rotation.

4) Milwaukee plays four games at home against the Cubs before their potential crucial series against the Cardinals. Chicago is playing its best ball of the season and the series is early enough that their big-name pitchers will throw.

5) With a dozen games left the Giants, Padres, and Marlins will do what all bad teams do at the end of the season. Watch for AAA guys getting their first starts on the mound, and no-name prospects whiffing at high fast balls out of the zone. Advantage Rockies.

6) Milwaukee has the edge over St. Louis in trying to catch the Rockies, but asking the Brewers to sweep the Cardinals on the road to end the season is a lot to ask. Especially if St. Louis still has something to play for.

The Cardinal’s schedule is too tough down the stretch and they end up 83-79. The Brewers split with the Cubs and take two of three from St. Louis and finish 87-75. Arizona clinches the first wildcard spot with 93 wins. And the Colorado Rockies go 89-73 to clinch their first playoff spot since 2009, champagne sprays throughout the clubhouse, and no one is asked to write an embarrassing retraction article.

Alan Tapley
Alan Tapley is an educator, author, and blogger who has lived just outside of Boulder for the last twenty years.  His published work includes two novels, two children’s books, a series of cartoons in the Minneapolis Star-Tribune, and multiple sports related articles. His love for family and the state of Colorado is only matched by one thing, his passion for sports.  The first baseball game he ever attended was at Wrigley Field, before there were lights.  At the final Bronco game at the old Mile High, he allegedly cut out a piece of his seat in the South stands.  But regardless of being here for the Avalanche’s last Stanley Cup, the Rockies only World Series appearance, and all the Broncos’ Super Bowl Victories, his wife never fails to remind him that he wasn’t at the University of Colorado in 1990, like she was.  The year the Buffs football team won the National Championship.
Tagged: Chicago CubsClayton KershawColorado RockiesLos Angeles DodgersMiami MarlinsMilwaukee BrewersMLBPlayoffsSan Diego PadresSan Francisco GiantsSt. Louis CardinalsWildcard