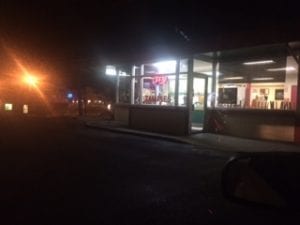 There’s something appealing about late nights, a liminal space between being who we *should* be at work and who we *would* be if we didn’t have to work. Even when you do “real” work late at night, there’s an odd feeling of suspension from reality. You’re out prowling your way home, cold sober and still in your work uniform, while everyone else sleeps or applies more eyeliner in the bathroom of dive bar that’s never going to be as dive-y as your reality when you lock your car doors when waiting for a traffic light under a bridge in tiny hours of the morning.

Aside from working late-night shows as an entertainer, I’ve worked late/night shifts at my “muggle” job for years. When you’re temporally isolated from your friends and even family, you start adding weird shit into your life to compensate. I used to buy Voodoo Doughnuts on Colfax at 2:00am when I worked on a nearby healthcare campus. It was usually me and a couple of sex workers eating chocolate-frosted, dick-shaped pastries in the weird camaraderie of late nights. (Although, to be honest, that sort of thing could happen just about any time on Colfax.) I’ve eaten corned-beef egg rolls long after midnight with a redhead whose name I suspected was a pseudonym and who had multiple facial piercings. Now that I think about it, the weird shit you add into your life is mostly fried foods and unconventional jewelry. Dave Atell would be proud of me. 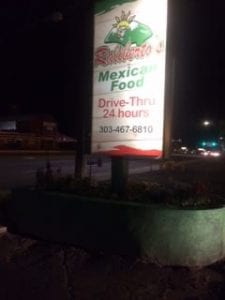 I’ve been driving home past a tiny Mexican place on Wadsworth for the better part of a year, always in the black of night. The neon sign assures me that “Drive-Thru Open 24 Hours.” WTF? Why does a taco stand in Wheat Ridge need to be open at 3:00am? There’s never anyone in the parking lot when I drive *to* work during the day. Is this a front for selling meth? Possibly the real-life version of Pollos Hermanos? Is this Burritos Hermanos? I had to find out.

I whipped my car into the parking lot and funneled myself into the drive through. There were three cars in line ahead of me. Again, WTF? Why are there so many cars needing tacos at 3:00am? I inched up to the light-box menu and spied a dispirited sign written on a piece of college-ruled notebook paper turned horizontal: Cash Only. My stash of cash was $2.00. Probably not enough for even a pair of chimichangas.  I backed out, turned around, went to the only gas station in Jefferson County that does NOT have an ATM, and then drove half a mile to a darkened Chase Bank and got some cash.

“I’m going in for burritos at the meth place!” I texted my buddy, Jim. “Do you want one?” 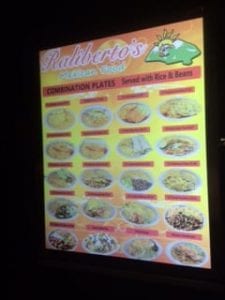 I rolled back to Raliberto’s, for such is the name of the venerable establishment (brief aside: I adore an unexpected name. I once knew a guy named Loduardo, a name I’ve never encountered before or since, which perhaps reflects on my immersion or lack thereof in the Hispanic communities), and re-entered the drive-thru line, which STILL was packed three-deep. I inched forward past the menu to the intercom…and choked. I couldn’t think of a single thing to order. I was faced with a literal glowing wall of Mexican delicacies (the best kind of Mexican wall!), it was midnight, I was starving—and no words emerged. This was perhaps the closest I have ever come to “performance anxiety.” I wanted it so badly that I blocked myself from getting it.

“Buh–urrito!” I finally stammered out. “And tamales.”

This was not my finest hour as a trained performing artist. I stuffed my shame into my cupholder and sneaked up to the window to get my paper bag of goodies. I had no idea what was in them, since I had failed at the standard American interaction of “drive-thru ordering.” I drove the treasure sac to Jim’s house to unpack it, lest I spill any green chili or methamphetamines, both of which are known to speed your system right on up there, albeit through different pathways. 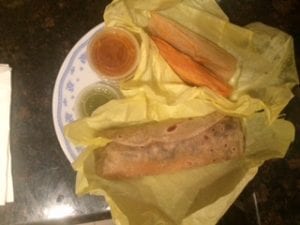 Jim and I unpacked the sack. Alas, no Blue Sky to be found. But there were three cups of what proved to be extremely spicy salsa—two reds and a green. #Christmas! The burrito turned out to be the breakfast kind (either because the guy in the kitchen took pity and gave met the emperor of all burritos or else because it was left over from the morning). It was nice—densely-packed chorizo and potatoes, a drizzle of cheese. Dipping into the sauces added some moisture and a zing of hot peppers. Next came the tamales. (Whose genius idea were tamales to begin with? They’re brilliant food items.) Raliberto, if that’s who was serving these up, had compensated for my lack of speaking ability and had given me a red tamale and a green one. The red one had beef in a hot sauce. The green one had a whole green chili inside. I bit into it and felt the heat scorch my taste buds off and melt a layer of skin from my tongue.

Jim saw the sweat break out on my forehead.

“You need some milk?”

Jim retrieved an entire growler of full-fat chocolate milk from his stash in the fridge. We all have our self-indulgences. He poured me a mug full, and I poured it between my flaming lips. It was delicious and dampened the fire, although the coals still glowed. Jim had to finish the green tamale. I ate some of the red one, but my tongue was too scorched to give you a true report on its qualities. I admit that, being from a lineage of white-bread people, I am sensitive to hot foods—other, hardier folk might find this level of heat to be tame. But I didn’t. 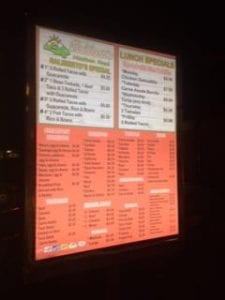 One of my pet peeves is when people talk about “best sex ever.” What does that even mean? What defines “best”? Best emotions? Best physical sensations? Highest amount of burning passion? Breaking the longest drought? It’s all subjective. Which is how I feel about burritos: my preferences are totally subjective. Did I enjoy Raliberto’s? Indeed, I did. It was tasty, well-filled, and accessible (this last piece being key to late night enjoyment). The ultimate test for both sex and burritos is: do you want more? For Raliberto, the answer is…Yes! I confess that I went back the next night and, with script prepared beforehand, I ordered a chorizo breakfast burrito smothered in green chili. I hid it from Jim, took it home, and ate it entirely by myself. It was an act of pure self-pleasuring. In the moment, I believed it to be arguably the best smothered burrito I have eaten in Denver, which is saying a lot, considering the number of breakfast burritos I have eaten in Denver. In the cold light of morning, all such certainty fades away, even though the memory burns bright. But that’s late-night, liminal-space foods for ya! Let it speak for itself though, that I went back to Raliberto’s because I wanted more—and it’s a damn good bet that the second time won’t be the last time.

Jessie Hanson
Jessie Hanson lives and works in Denver and couldn't be happier about it. Like the best-possible kind of Jekyl-and-Hyde scenario, she splits her life between science and storytelling. During the day, she performs clinical diagnostics and messes around with test tubes. At night, she performs behind the mic as a standup comedienne, in the air as a circus aerialist, and in rhinestones as burlesque dancer. She begrudges the hyper-inflated cost of a decent pair of false eyelashes. When she's not on stage, she sweating it out as an endurance athlete in triathlons and marathons across the West. She begrudges the hyper-inflated cost of a decent pair of running shoes. She's thrilled to be on board with OnDenver and writing about science, comedy, circus, athletics, and general fun on the Front Range!
Tagged: burritoscolfaxgreen chililate-nightmexican