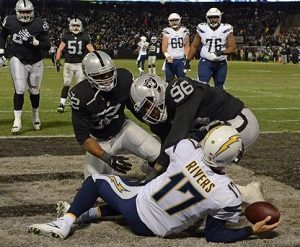 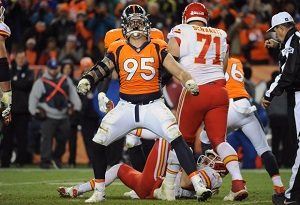 As the Denver Broncos finished up last season with a 9-7 record and a fishing trip during the playoff run, the question remains whether enough was added to the roster in 2017 to compete in the toughest division in all of football. With the Kansas City Chiefs and Oakland Raiders both going 12-4, and the always dangerous Phillip Rivers leading the Chargers, the wild west could be a shootout again.

The Oakland Raiders – We would all love to believe that the Raiders of last year were a fluke, and that Derek Carr is basically David Carr, but we can’t. After a season that included 28 touchdowns and only 8 interceptions, Derek Carr solidified himself as one of the better (and higher paid) quarterbacks in football. Khalil Mack and his 11 sacks dominated the defensive side of the field. And Amari Cooper elevated his play to become one of the elite receivers in the game. With the addition of Marshawn Lynch to the backfield, the only way Oakland struggles is if their Las Vegas luck runs out and they fail to win all the close games as they did last season (five wins by 3 points or less). But besides road games in their own division, their only true obstacles are against Dallas, the New York Giants, and the New England Patriots, all in Oakland.

The Kansas City Chiefs – The Chiefs didn’t change much up from last year, and why should they? Tyreek Hill became a game changer,Justin Houston and Derrick Johnson dominated on the defensive side of the ball, and Andy Reid continued to pull the right strings. But the Chiefs disturbed the status quo by drafting quarterback Pat Mahomes II with the 10th overall pick. It was a strange move as Kansas City is too good to throw a rookie into the mix, and too close to waste a high pick on someone that can’t immediately impact the team. After Alex Smith went 23-9 in his last two seasons with Kansas City, Andy Reid decides to shake things up? I don’t like it. And with a schedule that includes games at New England, Oakland, Denver, Houston, and the New York Giants, I’m looking for a slight step back.

The Denver Broncos – The real question is whether the Broncos added enough to improve over last year’s 9-7 team? The defense looks like the same dominant squad of 2016 with the additions of Domata Peko and Zach Kerr, and the offensive line hopes to be better with Ron Leary and Garrett Bolles. But unless Trevor Siemian has a breakout season, it’ll be up to offensive coordinator Mike McCoy to make the real difference. Last year’s offensive game plan was like watching orange and blue paint dry. Hopefully a fresh coat will make a difference.

The Los Angeles Chargers – While the Chargers did lose five games by 4 points or less last season, and one more in OT, this squad is worse than the 2016 San Diego version. Top picks, offensive lineman Forrest Lamp and wide receiver Michael Williams, have already been injured. Unless Joey Bosa is the next JJ Watt, and Phillip Rivers does his best Benjamin Button impression, I don’t see the Chargers (@NYG, @NE, @Dallas) winning a game until week 10 against an awful Jacksonville squad. And by that time it could be Cardale Jones at quarterback as the rebuild becomes official.

Alan Tapley
Alan Tapley is an educator, author, and blogger who has lived just outside of Boulder for the last twenty years.  His published work includes two novels, two children’s books, a series of cartoons in the Minneapolis Star-Tribune, and multiple sports related articles. His love for family and the state of Colorado is only matched by one thing, his passion for sports.  The first baseball game he ever attended was at Wrigley Field, before there were lights.  At the final Bronco game at the old Mile High, he allegedly cut out a piece of his seat in the South stands.  But regardless of being here for the Avalanche’s last Stanley Cup, the Rockies only World Series appearance, and all the Broncos’ Super Bowl Victories, his wife never fails to remind him that he wasn’t at the University of Colorado in 1990, like she was.  The year the Buffs football team won the National Championship.
Tagged: AFC WestAlex SmithAndy ReidDenver BroncosDerek CarrForrest LampJJ WattJoey BosaKansas City ChiefsLos Angeles ChargersNFLOakland RaidersPhillip RiversPredictionsTyreek Hill