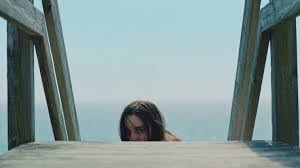 The Beach House is streaming on Shudder.

We’re in a period of change. Six months ago, most of us didn’t think we’d be where we are now. Six months from now, the smart money says that life will be just as unpredictable. Is it because of the pandemic? Partially, yet there’s more to it than that. After decades of neglect, people are rising up against systemic racism. Our economy is in flux. Our President is a driver of change, though not in the way he thinks or wants.

The way we view movies is changing, as well. I don’t just mean the continued closure of theaters and the improbable resurrection of drive-ins. In the old days, you expected bickering and unfunny jokes throughout the majority of a rom-com before the couple abruptly declared their love for each other. You expected a cop on the edge to lose his wife/best friend/second cousin twice removed and swear bloody vengeance against legions of goons.

Horror movies had the worst expectations of all. You expected a nubile young woman to be stalked by either a silent maniac or a cackling loon. There would be plentiful blood, no brains, and bargain-basement production values. To put it bluntly, it sucked to be a horror fan. Things change, though.

21st-century horror taps into our anxieties toward the unknown, and it does so with intelligence and sophistication. You’ll still see the occasional dopey slasher film, and you’ll also see gems such as The Babadook, which showed the ambivalence of parenthood, and The Witch, which brought a hoary folk tale to alarming life. The debut feature of writer/director Jeffrey A. Brown is The Beach House. It’s clever, unsettling, and the introduction of a major new voice in American horror. 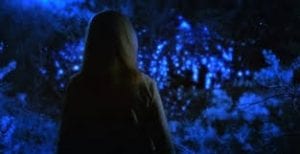 Some things can’t be fixed, though it’s not for lack of trying. Emily (Liana Liberato) and Randall (Noah Le Gros) don’t know their relationship is over, not consciously, anyway. She’s on her way up as a bright college student with an eye toward an astrobiology major. He’s on his way down as a college dropout with vague statements about finding himself and learning what life is all about.*

Their relationship is on life support, strained by a lack of communication and some world-class selfishness on the part of Randall. In the grand tradition of clueless men, Randall thinks he can repair the damage with a grandiose gesture. His father has money and owns a beach house. Considering it’s the off-season, they’ll have the place all to themselves.

Only not really! Emily discovers pill bottles in the bathroom cabinet and groceries in the fridge. Either a) they’re being stalked by an extremely homey homicidal maniac or b) there’s been a miscommunication. It’s B, and we’re introduced to Jane (Maryann Nagel) and Mitch (Jake Weber). They’re friends of Randall’s father, and they were under the impression that they would have the place all to themselves.

For Emily, this is not ideal, as we can surmise she wanted the solitude to either repair her relationship or end it. We can also surmise that Randall has a way of bullshitting people to avoid conflict. That’s a real big bummer since a strange fog rolls in from offshore and the water supply seems to be contaminated. The two couples are alone, frightened, and have no idea what’s coming for them. 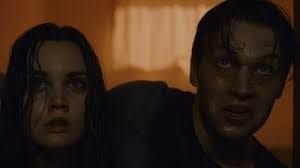 Director Jeffrey A. Brown was originally a location scout, and he’s more aware than most that the right place can make all the difference when making a film. His budget was…well, let’s go with modest. He didn’t let that stop him, and by utilizing the locations available along with tight cinematography and gnarly practical effects, he’s made a film that never feels cheap. Running at a hair under 90 minutes, Brown utilizes his time efficiently. We get to know our protagonists, get a whiff of the threat, and then we’re off to the races. Some people will say that Brown’s next film deserves a real budget. Maybe, but I wonder how much he really needs it.

Brown is the screenwriter, and he’s said, “I wanted to take what I felt was missing from horror movies and inject that into the script and production plan. My concerns about the onset of an environmental apocalypse provided a vehicle for the horror, while an interest in evolutionary science became the microbial fuel of the story.” He’s 90 percent of the way there, and the script does fine work showing us who the characters are, the details of the couples’ relationships, and how despite the generational differences, they’re more alike than they might think. The horror aspects are a slow burn. Once things get going, the good news is that the escalation feels organic. The story begins with a feeling of foreboding, that something is off somewhere. The (slightly) bad news is that once things get going, the question of Emily and Randall’s relationship is sidelined for a pure focus on survival. And while I understand that reality would likely play out like this, there are too many moments where characters scream each other’s names. 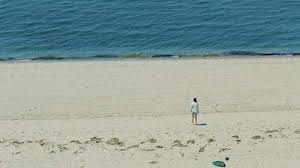 The cast does professional work, but the film rests firmly on the shoulders of Liana Liberato as Emily. I thoroughly enjoy films with characters like this. Emily isn’t a hardened badass or a barely-hanging-on trauma survivor. She’s a normal person; one who’s intelligent and resourceful. Liberato’s performance always feels honest and natural, even when she’s running in fear or dealing with a serious problem involving her foot.

The Beach House is not your average horror movie…or maybe it is. The film was made in 2019, and while Jeffrey A. Brown couldn’t have known what 2020 would bring, his debut would presciently tackle themes of isolation, paranoia, and environmental upheaval. Horror has moved beyond creature features and slashers. It’s a genre with something to say, and we ignore its messages at our peril.

*Spoiler alert – most likely a job involving fries and a nametag.

Tim Brennan
Tim has been alarmingly enthusiastic about movies ever since childhood. He grew up in Boulder and, foolishly, left Colorado to study Communications in Washington State. Making matters worse, he moved to Connecticut after meeting his too-good-for-him wife. Drawn by the Rockies and a mild climate, he triumphantly returned and settled down back in Boulder County. He's written numerous screenplays, loves hiking, and embarrassed himself in front of Samuel L. Jackson. True story.
Tagged: jake weberjeffrey a brownliana liberatomaryann nagelnoah le grosthe beach house