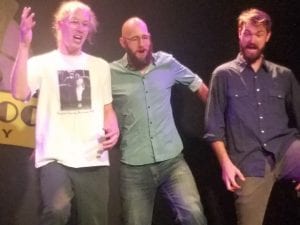 I tried to write a different column about today’s topic and “the thing didn’t happen.” It was stiff and weird and totally contrived, which is a total contrast with the thing that I want to actually write about. That thing is Mouse Couch, a local improv team that I think is really going places.

Mouse Couch (no idea what this name is for, except probably something with the repeated “ou” diphthong?) is made up of three dudes, two of whom are deeply strange and one who seems fairly normal and sells real estate in his spare time. The strange ones have respectively inverse relationships with hair. If I could name someone who I think totally could be famous, (if he wanted to be, but he doesn’t want to be) it would be one of these guys.  I would likely donate a kidney to keep this group together. (I jest slightly, but only slightly). I really like this group. 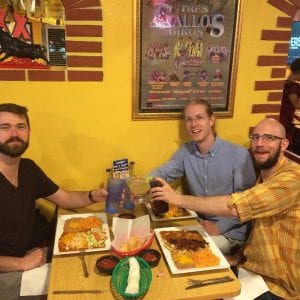 Wait just a minute, you say. Keep your organs attached, you say. What’s so great about this group that you’d give up your non-essential viscera to keep them going? Let me answer that. I have strict rules about what needs to be happening on stage in order to make the event enjoyable. One of them is that the performers must be having fun. Fun is mutually exclusive to being stiff and weird and totally contrived. The guys in this group have fun. I adore and envy anybody who’s able to tap into fun that deeply, without even a hint of recreational drugs.

I’ve been watching these three guys play improv around Denver for several years. I’ve seen them as individuals doing short-form and long-form play. They’re good as individuals. I’ve seen them playing on other teams, too. They’re good on their other teams. The difference with this team is that they’ve found their group-think groove. Despite their oddities and disparate hirsute scenarios, they’ve found the place where they all synch up. It’s fun to watch because it looks fun to do. 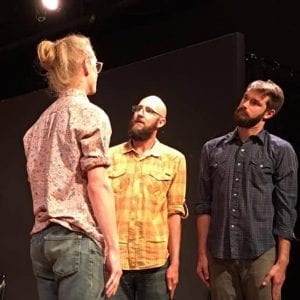 The kind of joining and merging really only happens when the players genuinely like and genuinely trust each other to support every choice made on the stage. I looked up their bios for this column and it said that “the Mouse Couch philosophy is to play characters that love each other.” That shines through. (In an aside, I have long adored Laurel & Hardy and hated the Three Stooges for just this reason. Stan and Ollie, for all their quarreling, loved each other and the Stooges disliked each other. One was fun to watch and the other was unpleasant to behold).

So, what is it like to actually watch them? Well, it’s fun! To get a little wonky, the team does collaboration really well. Many teams struggle to find a physical rhythm that keeps them moving around the stage in a coherent manner. Mouse Couch lands in that pocket of synchronicity quickly and reliably. Mouse Couch also makes an example of supportive choices. When one player stretches out his imaginary wings, the others are instantly in line with him.  One character places them in an obscure location; the rest are immediately adding detail to it. 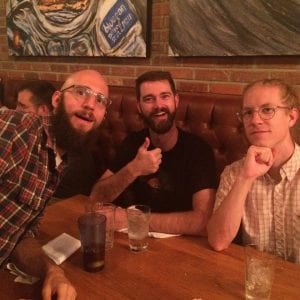 We, the audience, have the pleasure of being along for the ride. I’ve seen this team take the audience far beyond the usual scenarios of “washing dishes in the kitchen” or “dealing with a weird person at the bus stop.” With Mouse Couch, you’re more likely to end up seeing a dominance display between gargoyles or observing the financial negotiations of gut bacteria. Weird? Yes. Interesting? Definitely.

Good improv is a lot like a story that you tell at a party and then trail off with a lame “Well, I guess you had to be there…” To really get the flavor of Mouse Couch, you really should be there because I’m using a thousand words to describe the picture of what this team is. Fortunately for you, there’s opportunity coming up for you to be there!! They’ve happening on September 27 and October 12.  In re-reading this column, it comes across as a little fan-girly. Well, I suppose that’s accurate: I’m a pretty hardcore fan of what they’re doing.  But at least it’s not stiff and weird and totally contrived.

Jessie Hanson
Jessie Hanson lives and works in Denver and couldn't be happier about it. Like the best-possible kind of Jekyl-and-Hyde scenario, she splits her life between science and storytelling. During the day, she performs clinical diagnostics and messes around with test tubes. At night, she performs behind the mic as a standup comedienne, in the air as a circus aerialist, and in rhinestones as burlesque dancer. She begrudges the hyper-inflated cost of a decent pair of false eyelashes. When she's not on stage, she sweating it out as an endurance athlete in triathlons and marathons across the West. She begrudges the hyper-inflated cost of a decent pair of running shoes. She's thrilled to be on board with OnDenver and writing about science, comedy, circus, athletics, and general fun on the Front Range!
Tagged: comedyimprovtalentteam