Home » Blog » Movies » It Always Ends In A Fight

It Always Ends In A Fight 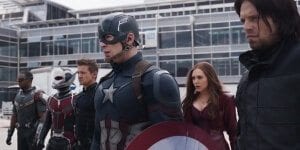 With a few exceptions, nobody sets out to make a bad movie. Whether the filmmakers are confident or delusional, they start out with good intentions. But here’s where it gets tricky.

In order to make a good movie, you need a compelling story, interesting characters, and a way to bring the two together organically. Sounds easy, right? It gets even harder when we move into the world of blockbuster filmmaking. You have to factor in massive budgets, the desire of nervous executives stifling risk in order to maximize profits, and inexperienced directors getting swallowed up by their project.* These are all reasons why, when the summer movie season starts, many of us prepare ourselves for the onslaught of loud and stupid.

Yet miracles happen. Blockbusters are released that not only have spectacle, but also intelligence and wit. Given how dysfunctional and cowardly the modern studio system is, it’s astounding that every year, populist entertainment of quality is released. I’m talking about movies like The Dark Knight, or Mad Max: Fury Road, or The Bourne Ultimatum. That trend continues with Captain America: Civil War, and it makes good on the promise of 2008’s Iron Man.

Picking up after the events of last year’s Avengers: Age of Ultron, we’re re-introduced to a team of Avengers on a mission. Captain America (Chris Evans) is the team’s leader, and he’s joined by the Black Widow (Scarlett Johansson), Falcon (Anthony Mackie), and the Scarlet Witch (Elizabeth Olsen). The villain Crossbones (Frank Grillo), still a little testy after having had a building dropped on him in Captain America: The Winter Soldier, has targeted an infectious disease lab to steal a bioweapon, and the Avengers aim to stop him. But things go south, and an explosion rips a hole in a skyscraper, causing civilian casualties.

For the world, this is the last straw. They’ve put up with an alien invasion in midtown Manhattan, helicarriers exploding over the skies of Washington D.C., and a psychotic robot laying waste to the European nation of Sokovia. It seems that every time the Avengers save the world, they reduce a good-sized chunk of it to smoking rubble. That’s why 117 member nations of the U.N. pass the Sokovia Accords. It directs that, instead of being a private paramilitary group, the Avengers will now be a task force with U.N. oversight.

Sounds like a good idea, right? Iron Man (Robert Downey Jr.) certainly thinks so. Enhanced individuals like the Avengers need to be accountable to the world for their actions. Cap doesn’t like it. What if the team needs to intervene in a conflict, but politics prevent them from doing so? They’re both right, and this sets up conflict between Earth’s mightiest heroes.

Things get worse when a bomb detonates in a terrorist attack and Cap’s BFF The Winter Soldier (Sebastian Stan) is implicated. A victim of decades of brainwashing, he’s a walking killing machine who has rediscovered his conscience, and the U.N. directs the Avengers to hunt him down. Cap sets out to prove his innocence, kicking off a series of escalating skirmishes between factions of heroes. Throw into the mix the warrior-king Black Panther (Chadwick Boseman), who has his own bone to pick with the Winter Soldier, as well as your friendly neighborhood Spider-Man (Tom Holland). There’s also the mysterious Zemo (Daniel Bruhl), who’s murdering former Hydra operatives, and has his own shadowy connection.

For anyone other than an unrepentant nerd like me, this movie shouldn’t work. It has a running time of nearly two-and-a-half hours, numerous subplots and over a dozen heroes punching, blasting, shrinking, magicking, and thwipping. It’s directed by the guys who made You, Me and Dupree. On paper, this is again a thing that rhymes with clusterduck.

But look a little closer, and you’ll see why Civil War works so well. Joe and Anthony Russo, the directors of the aforementioned clusterduck, also were heavily involved with the beloved TV comedy Community. They learned how to effectively balance a large ensemble cast, how to portray emotion through action, and how to cleanly shoot an action scene with creativity. As a result, they’ve made a film chock full of propulsive plotting and kick-ass fight scenes. More importantly, the know when to slow down for character beats to let the film breathe. Some of the best moments are between characters who care deeply about each other arguing.

Christopher Markus and Stephen McFeely have been part of the Marvel Cinematic Universe since they wrote 2011’s Captain America: The First Avenger. As much as I dig Joss Whedon and the excellent work he did on the previous Avengers movies, Markus and McFeely are a big reason why the Captain America movies are really the crown jewels in the crown of the MCU. Whedon occasionally has a nasty habit of having his characters sound the same. But Markus and McFeely go to great pains to make sure that every character, even those with minimal screen time, have their own unique voice. They know that one of the aspects making the conflict so compelling is that we like the characters on both sides.** Plus, as much as the movie might seem like Avengers 2.5, this is at heart Captain America’s story, and they never forget it.

It also helps that the supporting players are bringing their A game. I’m pretty confident that most people’s favorite character will be teenage wise-ass Spider-Man. Tom Holland’s Peter Parker is a good kid, but he’s also an inexperienced ball of enthusiasm who gets by through equal parts luck and skill. As the Black Panther, Chadwick Boseman is an intriguing mix of soulfulness and nobility. Even folks with limited time, like Jeremy Renner’s I’m-too-old-for-this-superheroing marksman Hawkeye, Scarlett Johansson’s shadowy pragmatist Black Widow, or Paul Rudd’s gushing fanboy Ant-Man, make indelible impacts. Nobody gets left behind.

Robert Downey Jr. has played Tony Stark six times now, and this is easily his best portrayal of the billionaire playboy philanthropist. He’s raw, going through trauma, guilt, and anger. The trademark snark Downey has brought to the character of Iron Man isn’t the default emotion, but it’s a defense mechanism, and you can track how he’s grown and changed since the first Iron Man film. Downey is one of the world’s biggest movie stars, but people sometimes forget that he’s an excellent actor, and that skill is on display here.

For years, people pointed to Christopher Reeve’s portrayal of Superman as the platonic ideal of a superhero performance. As the good Captain, Chris Evans is right up there with him, equal in every way. He’s the beating heart of the MCU, a guy who does the right thing not out of revenge or loss, but because it’s the right thing to do. It would be easy to make Cap a hopeless square and a guy who’s always right. But maybe he lets his friendship with the Winter Soldier blind him. Maybe he’s escalating the situation out of selfishness. Cap has also changed since his first appearance, and seeing Evans guide him into morally murky waters is terrific.

So, rejoice, since we live in an age of marvels. Captain America: Civil War is muscular filmmaking, but never at the expense of character or ideas. Every time you think it’s going to become overstuffed, it provides you with a joke, or a sincere moment, or a thoughtful point of view. Is it the best film in the MCU? I’m not sure yet, I need to see how it speaks to me over time. But if it’s not the best, it’s pretty high up there.

*Yes, Colin Trevorrow, I’m looking at you and Jurassic World.

**Contrast that with the surly Kryptonian and card-carrying psychopath featured in Batman v. Superman.

Tim Brennan
Tim has been alarmingly enthusiastic about movies ever since childhood. He grew up in Boulder and, foolishly, left Colorado to study Communications in Washington State. Making matters worse, he moved to Connecticut after meeting his too-good-for-him wife. Drawn by the Rockies and a mild climate, he triumphantly returned and settled down back in Boulder County. He's written numerous screenplays, loves hiking, and embarrassed himself in front of Samuel L. Jackson. True story.
Tagged: anthony mackieanthony russocaptain america civil warchadwick bosemanchris evanselizabeth olsenjoe russorobert downey jrscarlett johanssonsebastian stantom holland