I Think I Love Baby Driver More Than My Family 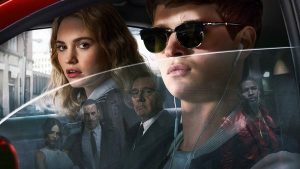 Everybody’s got a personal soundtrack in their head. I think we all do. Sure, the music is always different. You might walk into a party, your mood is up and your adrenaline is starting to rise, and Legend Has It by Run The Jewels is on a loop in your cerebral cortex. Maybe you see your significant other, or somebody you hope will be your soon-to-be significant other. The light hits them just right, you catch them at the perfect angle, and one of the countless versions of My One and Only Love floods your brain on a wave of endorphins.

Even if you’re not a card-carrying music nerd, you likely do this. I think it’s cool, and I’m so curious what your personal soundtrack is and which song gets cued up in what situation.* Edgar Wright’s personal soundtrack is vast and deep. We heard snatches of it in his TV series Spaced and in his films like Shaun of the Dead and Scott Pilgrim vs. the World. Wright is an obscenely talented filmmaker, not just because he’s able to coax great performances from his casts, and not just because he’s able to edit his scenes with skill and precision.

Like Martin Scorsese, Wright knows precisely the right music to use for any given scene. Remember in Suicide Squad,  where throughout the entire film needle drops continuously played, like director David Ayer lost some kind of weird-ass bet? Wright has never been that sloppy, and throughout the years he’s honed his timing and his almost supernatural sense of knowing just where music should be placed. His latest film, Baby Driver, is possibly the apex of those skills, and it’s potentially the most fun film of the year.

We meet Baby (Ansel Elgort), a quiet young man with a very specific set of skills. No, he doesn’t excel at kicking the crap out of others or vanishing into thin air. As a young boy, a car wreck killed his parents and gave him a nasty case of tinnitus. One of the things he’s good at is using music to drown out the hum, which is why he always carries multiple iPods with him. He’s got playlists ready to go for fetching coffee, for hanging out with his deaf stepfather Joseph (CJ Jones), and for driving.

That’s the other thing he’s good at. You put Baby behind the wheel with the right music, he’s a wild animal. He’s so good he’d make Elwood Blues pee his pants, and that’s a big reason he does jobs for Doc (Kevin Spacey). As a kid, Baby stole Doc’s car, and instead of killing him, Doc just put Baby to work paying off the cost of the stolen car. Doc runs a crime syndicate, and he hires rotating crews of three crooks to pull off jobs with Baby as the driver. In the incredible opening sequence, we see Griff (Jon Bernthal), Buddy (Jon Hamm), and Darling (Eiza Gonzalez) hop out of Baby’s car in front of a bank. Baby cues up Bellbottoms by the Jon Spencer Blues Explosion, and going forward absolutely everything is timed to the rhythm of the music. Squealing tires. Gunshots. The whole thing. The genius of this is that it squarely puts us in Baby’s head, and it shows us how he perceives the world around him to the beat of whatever’s playing.

There’s good news, better news, and bad news for Baby, though. The good news is, he’s almost done paying off Doc, then he’ll be free to live his life. The better news is Debora (Lily James), the lovely waitress he falls head over heels for and who could possibly be The One. The bad news…well, that’s where things start to really suck. Doc decides that maybe Baby’s not as done as he thought, and teams him up on the latest heist with hair-trigger lunatic Bats (Jamie Foxx).

You watch enough movies, you’ll eventually start noticing stories getting reused. I know, you’ve seen a boatload of movies with the crook who needs to pull One Last Job before retirement. Like our old pal Roger Ebert used to say, it’s not what the movie is about, but how it’s about it, that’s what really matters. Baby Driver is absolutely a One Last Job movie. Edgar Wright has taken the bare body of that concept and put a high shine on it. He just knows the rhythms of film, when to crank up the energy of a scene and when to slow down, breathe, and let the characters just be. His editing and sound design are so precise here, where the camera angles, sound effects, and music cues work together in crazy harmony. Wright is unquestionably one of the best directors on the planet, and he proves it with this film. Plus, let’s give him props for shooting a film in Atlanta and actually having the city in the movie be Atlanta.

This is his first feature where he’s written the screenplay solo. Prior to this film, he worked with Michael Bacall on Scott Pilgrim and with Simon Pegg on the Cornetto Trilogy.** As a solo writer, Wright is solid, for the most part. His stuff is definitely an acquired taste, with mannered dialogue like, “Shop. Let’s talk it.” Did his pal Quentin Tarantino rub off on him a tad? Perhaps, and that’s okay. He’s underwritten Lily James character a little here, particularly during the climax where she doesn’t have a hell of a lot to do beyond look alarmed. I don’t love that, but there it is.

Wright also has a real gift for casting, for populating his films with actors both large and small that inhabit their characters correctly. Everybody knows the kind of movie they’re appearing in and calibrate their performances to compliment each other. The chemistry between Elgort’s Baby and James’ Debora is genuine and genuinely sweet. Elgort doesn’t have much dialogue, and he doesn’t need it. He does all of his acting with his body, and it’s a minimalistic performance that contrasts nicely with the motormouthed villains. All of them are solid, and I particularly enjoyed Jamie Foxx as Bats. It’s a high-wire psycho performance that blends real menace and humor, and Foxx is in the upper echelon of maniac portrayals like Joe Pesci in GoodFellas and Jeremy Renner in The Town.

Baby Driver is the kind of movie that justifies going to the movies. The parking, overpriced snacks, ding-dong in the row in front of you playing Pokemon Go, the whole pain-in-the-assedness of modern filmgoing, none of that matters. Because when you see a film with this kind of thrumming energy, wit, intelligence, pure joy, and you get to feel all of that with a group of strangers and be bound together for a unique one hour and fifty-three minutes, it’s an experience that’s profoundly magical. This may not be the best film of the year, but it sure as hell is the most fun film of the year.

*If I’m stuck in traffic, and finally get a chance to start moving at a good rate of speed, Pink Girl with the Blues by Curve auto-loads in my brain.

**These films are Shaun of the Dead, Hot Fuzz, and The World’s End. It began as a reference to a brand of convenience store ice cream in England, and all three films have themes about the evolving nature of friendship.

Tim Brennan
Tim has been alarmingly enthusiastic about movies ever since childhood. He grew up in Boulder and, foolishly, left Colorado to study Communications in Washington State. Making matters worse, he moved to Connecticut after meeting his too-good-for-him wife. Drawn by the Rockies and a mild climate, he triumphantly returned and settled down back in Boulder County. He's written numerous screenplays, loves hiking, and embarrassed himself in front of Samuel L. Jackson. True story.
Tagged: ansel elgortbaby drivercj jonesedgar wrighteiza gonzalezjamie foxxjon bernthaljon hammkevin spaceylily james