“The noble Brutus hath told you Caesar was ambitious. If it were so, it was a grievous fault. And grievously hath Caesar answered it” 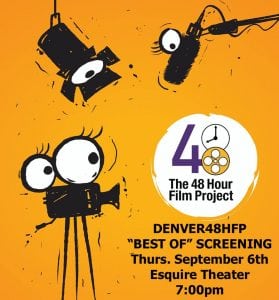 I possess the skills to fulfill my delirious ambition. Such was my fantasy of participating this year in the Denver 48-Hour Film Project, a competition-cum-art-festival-cum-orgy of self-flagellation where participants create 100% of a movie in a single weekend. When cold sober, in the harsh light of morning, of course it’s ridiculous to make an entire film, start to finish, writing and shooting and scoring and editing, in just 48 hours. Who would do that? Crazy people who drink tiger blood and vanquish their enemies. I sip gin and have never noticeably vanquished anything except tonic water.

I still wanted to do it.

In the movies, your friends are the ones who say, “follow your dreams” and “dare to believe” and “your heart will guide you” and other such nonsense. In reality, your friends are the ones who look you in the eye and say, “that dude is a total douchebag and you’re being a complete idiot over him.” They also sometimes say, “Really? You’d be good at that, but you don’t have the infrastructure in place to do it this year.” Which was exactly what happened, and which was exactly, unfortunately, undeniably true. I have zero experience shooting films and I don’t have the cameras, the crew, the directorial skills, or the editing software in place to make a film happen in 2018. It was a crazy idea.

As it happens, though, I have some crazy friends in the local production company  Studio C3 who practically bathe in tiger blood and do their winning in bulk. They do have established infrastructure and mad editing skills and the boundless ambition necessary to even try. And they did it. They made a short film in 48 hours that is currently in the top-15 picks out of dozens of entries in the Denver competition. It’s called Safe. Away and it’s awesome. If you get a chance to see it, you should definitely do that. (You can also check out some of the same production company’s other stuff, which is totally Denver and totally worth seeing.) Not to brag on my friends, but they won the 48-Hour Film Project’s Best Film of Denver 2017 and screened at the Denver Film Festival 40 and Filmapalooza 2018.)

In this column, I normally encourage people to put on pants and actually go outside of their homes to see some live entertainment. Today is a bit different: I’m encouraging people to fire up their internet browsers and check out some online videos. The Denver 48 Hour Film Project has produced films that have won awards at festivals and competitions across the country and been screened internationally. And they’re being made by our own talented people, right here in Denver, featuring the landmarks and landscapes of this gorgeous place we call home. You can get a glimpse of up-and-coming performers and seasoned professionals collaborating on some genuinely clever and totally original 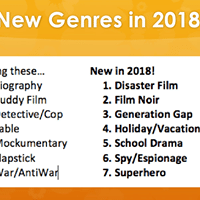 Getting back to the idea that this is crazy…it is. The rules of the 48 Hour Film Project require that the film be created in its entirety within 48 hours. Participants draw lots to see what genre is assigned to them and the script must include certain required elements that function as little shout-outs to the audience and judges. These are not given to the filmmakers until the start of the time allotment and serve to ensure that nobody prepares a script or shoots a scene ahead of time. Participants then write, cast, shoot, edit, score, and submit their films. This requires a Herculean effort and a heroic amount of caffeine. If the cast is not shaking from emotion or exhaustion, then, by the end of the two days, they are certainly shaking from OTC stimulants and sleep deprivation.

(Does staying awake for that long, even heavily caffeinated, seem dubious? Here’s the secret: some of the cast takes shifts. I spoke with my buddy on the team, Chris Gallegos, and he told me the actors generally shoot from around 9am to midnight. This seems arduous enough to me, but pales compared to the directors and editors. They do stay up for most of that time, supporting the efforts with a couple alternating shifts of naps and a metric ton of coffee.) 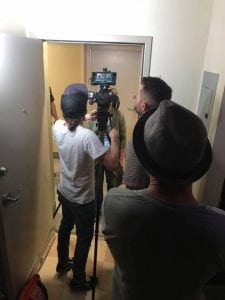 After receiving their challenges, the crews head off to write their script and then cast, shoot, and edit it down into a 4-7 minute masterpiece. Based on years of creating my own narrative work, it’s this last part that impresses me the most. Shooting film takes hours, certainly, but it’s at least real-time. (What you shoot in 5 seconds becomes 5 seconds of raw footage.) Editing is a whole other animal. Splicing together a sequence that plays for 5 seconds could take hours. Editing it down into a simple, narratively-coherent, focused message with a brief timespan is a whale of an effort.

After 48 hours, the crews stumble back in from their shoots and editing bays, sleep-deprived and babbling something about losing the light before that last line could be shot, clutching their files of footage. What they have in their sweaty, shaking hands is five minutes of magic. That Costco flat of Red Bull was totally worth it.

Check it out, folks. Give yourself the treat of seeing a few minutes worth of your friends’ and neighbors’ artistic effort and achievement. It’s not Les Mis–thank God! It’s real, here, human artworks that you can engage with right now. And you have to admire those who don’t just think about doing something like this, but actually do it. That’s not just ambition; it’s action.

Easter Egg: If/when you watch Safe. Away, look for Chris Gallegos. In the original version, he has his cell phone visible in his pocket. In the director’s cut, that’s been taken out. Which version are you watching?!

Jessie Hanson
Jessie Hanson lives and works in Denver and couldn't be happier about it. Like the best-possible kind of Jekyl-and-Hyde scenario, she splits her life between science and storytelling. During the day, she performs clinical diagnostics and messes around with test tubes. At night, she performs behind the mic as a standup comedienne, in the air as a circus aerialist, and in rhinestones as burlesque dancer. She begrudges the hyper-inflated cost of a decent pair of false eyelashes. When she's not on stage, she sweating it out as an endurance athlete in triathlons and marathons across the West. She begrudges the hyper-inflated cost of a decent pair of running shoes. She's thrilled to be on board with OnDenver and writing about science, comedy, circus, athletics, and general fun on the Front Range!
Tagged: Entertainmentfilmindependent filmindiemovies