Here There Be Xenomorphs 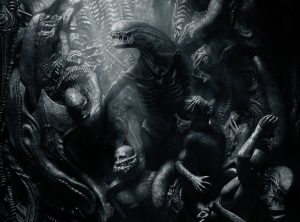 In the universe of Alien, humanity is not wanted or needed. We’re exploring a hostile void where the reward for discovery is death, and compassion will get you killed.* Morality and intention don’t matter, only brute survival. Overall, I’m a pretty positive guy, but there’s something deeply attractive to me about the relentless nihilism on display in these films. There’s a feeling that mysteries are out there, and we’ll never solve them.

At least that used to be the case. In 2012, Ridley Scott made the beautiful and wrongheaded Prometheus, which operated on the premise that we would finally learn the origins of the iconic murdercritters that menaced Sigourney Weaver across the length and breadth of the galaxy. Prometheus divides fans of the Alien franchise in much the same way Americans are divided over Donald Trump. It was, however, a modest hit, and there was inevitably talk of sequels.

There has been talk from Ridley Scott about another 4 films in the franchise, or possibly another 2 to create a Weaver-less trilogy. All of this from a guy entering his 80th year, which is impressive. His newest film is Alien: Covenant, a direct sequel to Prometheus and a prequel to Scott’s own Alien.** It’s a fascinating course correction and one that I suspect will continue to divide viewers.

Picking up roughly 10 years after the events of Prometheus, we’re introduced to the good ship Covenant. It’s on a multiyear mission to reach a planet ripe for colonization, and the ship has 2,000 colonists, a crew of 14, both in hypersleep, and numerous frozen embryos. The only being “awake” on board is the android Walter (Michael Fassbender). That all changes when an accident occurs and the ship’s captain (played extremely briefly by James Franco) burns to death in his sleep pod.

That’s a big old bummer for the now awakened crew, particularly for Daniels (Katherine Waterston), the captain’s wife and third-in-command, I’m sorry, I meant second-in-command. Oram (Billy Crudup) has now ascended to Captain, and while he’s a devout man of faith, he doesn’t exactly rise to the occasion. The crew is profoundly demoralized, and when they detect a distress signal from a nearby and seemingly habitable planet, they have a choice to make. They can either go back into hypersleep for another 7 years to reach their original destination or travel for a few weeks to this new planet and give it a shot. In the grand tradition of people in all the previous Alien films, they make an exceedingly poor choice and head for the new planet.

An exploratory team heads down to the surface and, in short order, everything goes right to hell. Two team members unwittingly ingest spores, get all explodey, and suddenly albino beasties known as neomorphs are wiping out the crew. A robed figure arrives to rescue them and takes them to a mysterious necropolis. This is David (additionally Michael Fassbender), the android crew member of the vessel Prometheus. What has he been doing all these years? While the team uncovers the mystery of David, Tennessee (Danny McBride), the pilot of the Covenant, struggles to plan a rescue.

First and foremost, recognize that Alien: Covenant is a course correction. Viewers of Prometheus expected a bug hunt. What they got in Prometheus was a beautiful and fitfully stupid movie that promised to answer big questions about the origins of the xenomorphs and the Engineers, yet failed to do so. There were a couple of problems with that premise. First, the xenomorphs work along similar lines as the unstoppable killer Michael Myers from Halloween. Once you remove their essential mystery, they become significantly less interesting. It doesn’t matter where they came from, it only matters how characters respond to them. Second, if you insist on showing their origins, you damn well better make it interesting. Prometheus didn’t do that.

Alien: Covenant is a case of Sir Ridley wanting to have his cake and eat it, too. He wants philosophical musings about the nature of humanity, a reveal of the creation of the xenomorphs, and a bunch of impressively gnarly kills. We get all of that, and this is the third best film in the series.*** Ridley Scott is like Michael Bay’s smarter and classier brother, and even when he makes a movie that’s terrible, like Robin Hood, it’s still interesting-looking and well-put together. Scott realized that, in order for the franchise to keep chugging along, there needed to be peril and gore aplenty. He’s made an installment that looks great, has excellent set design elements, and the action scenes are fast-paced and tense.

He’s working from a script by Dante Harper and John Logan, based on a story by Jack Paglen and Michael Green. As scripts go, it ain’t half bad. We’ve got mysteries that, while they didn’t necessarily need to be revealed, are revealed clearly and concisely. Characters, or at least the main ones, are compelling and likable. Unfortunately, the ball is dropped by a host of essentially one-dimensional supporting characters. Remember how the space marines in Aliens received brief brush strokes so that when they were inevitably torn asunder, their deaths made an impact? That doesn’t always happen here, and that’s a pity.

The cast here may not have quite the pedigree of Prometheus, but they’re overall more interesting. As Daniels, Katherine Waterston deals with both the loss of her spouse and a new life that she never really wanted. These films have always done well with strong female characters, and Daniels is no exception. I am a superfan of Danny McBride, and I have to admit that when I heard the co-creator of the hilariously filthy Eastbound and Down would be appearing, I was interested and a little apprehensive. Foolish critic! McBride dials down the goofiness and, while Tennessee is still funny, he’s also thoroughly competent.

Ultimately, the MVP is Michael Fassbender. His dual performance is the main reason to see this film and numerous scenes between Walter and David are darkly amusing, a little campy, nd a little tragic. There’s a particular moment where David teaches Walter to play a recorder. It’s jacked to the roof with homoerotic energy, and the nervous titters of audience members around me made it all worthwhile. Fassbender is one of the world’s most talented actors, and he proves it yet again.

While the film isn’t perfect due to issues like the non-development of minor characters and an interesting religious concept that’s brought up and subsequently ignored, I quite liked Alien: Covenant. I’m intensely curious about what others think. This feels like the kind of film that people either get on board with or want to burn to the ground.

*Check out this fascinating essay about the dangers of empathy in Alien.

**Does that make it a prequel sequel? The mind boggles.

***A brief ranking of the series:

Tim Brennan
Tim has been alarmingly enthusiastic about movies ever since childhood. He grew up in Boulder and, foolishly, left Colorado to study Communications in Washington State. Making matters worse, he moved to Connecticut after meeting his too-good-for-him wife. Drawn by the Rockies and a mild climate, he triumphantly returned and settled down back in Boulder County. He's written numerous screenplays, loves hiking, and embarrassed himself in front of Samuel L. Jackson. True story.
Tagged: alien: covenantbilly crudupcarmen ejogodanny mcbridedante harperdemian bechirjohn logankatherine waterstonmichael fassbenderridley scott