Home » Leaf of the Week » Hashing It Out 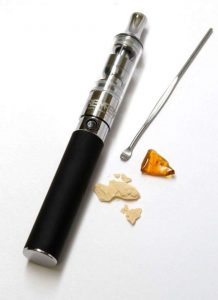 Cannabis extracts, or hashish, is way more potent than smoking regular flower. I am not sure about your tastes, but occasionally I need something with a little more kick to it. Rough days happen, whether it is out on the trail or in the office and hash can be just what the doctor ordered. The hard part is deciding what kind to choose. Everyone has their preference these days, from the old- school pressed hash to the new oil concentrates, here are some of my favorites.

The crystals that cover a cannabis leaf are called trichomes and hash production begins with separating these trichomes from the plant material, or kiefing. The easiest, most user-friendly way to do that is to check out a kief box or pollinator. Most head shops will sell kief boxes, usually just a square box with a screen in it. You put the weed on the screen and shake it lightly causing the trichomes to fall off. The result is a fine powder that can then be collected and smoked, or pressed into brick form with a little heat applied.

I like bubble hash because it is not super intense, and it can be put on some weed or rolled in a joint without causing any burning issues. Although it is not as potent as other cannabis concentrates, bubble hash is a style of hash that customers tend to prefer because of how it is processed. It is made using “Bubble Bags”, a patented technology that finely separates the THC from the plant material using ice water. Mmm bubble hash, it is so versatile.

When it comes to our concentrate snobs, they tend to gravitate towards the CO2 oils. CO2 is preferred because there were no chemicals used in the making of it, CO2 occurs naturally and leaves behind no residues. CO2 extraction can strip the plant oil of any terpenes or flavor though. This can be considered a negative when vaporizing, but beneficial for making edibles that you do not want to be weed flavored.

Butane Hash Oil (BHO) uses butane as the main solvent. Live resin, wax and shatter are forms of shelf-stable BHO oils that are very popular, I like shatter myself. This process requires you to run butane gas through a canister of weed and collect the oil that comes out. Butane attaches itself to the THC and separates it from the plant material. Do not worry though, the butane must get purged from the oil, which is hazardous and I never recommend you try on your own. The result should be a clear liquid that dries to a hard state. Using this extraction method THC potency can come close to ninety percent.

Colorado has laws requiring that all hash must be tested for residual contaminants before being sold. No matter what the test results say though, some people just do not want a product that was processed with hazardous materials. If you count yourself as a fan of solvent-less hash I would recommend checking out rosin. It is a style of hash that is manufactured using pressure and heat, and it can be dabbed. When made by a manufacturer rosin is usually made under a large industrial press but the DIY hash smoker can easily make some at home with a hair press and parchment paper, not nearly as many tools as you need with other extraction methods.

Ninety percent potency is impressive, but what about purity? For purity check out distillates, some folks in the industry are even calling distillates the future of concentrates. Distillates use an extraction method called “short path distillation” which involves pressure and low heat in a very powerful vacuum. In this vacuum the THC turns into a vapor and separates itself from contaminants. Imagine how one makes moonshine. The oil that is collected here is pure THC oil, with a texture like honey, usually testing upwards of 90% purity. The purity is what it all comes down to when buying hash.

Just to give you a head’s up, smoking hash can be a pain in the ass and sometimes can get you way too high, I usually reserve it for just before bed. Not to mention, for every gram you buy don’t expect to use 100 percent of that gram, you will lose something somewhere. Hash can be sticky and hard to handle, then when it dries can be like sap. My preferred method for using full-melt hash is to put a small piece into a vaporizer. Oil vaporizers can be a little more simple and cleaner than using a dab rig, that is what the kids call their hash bongs.

I do not recommend daily use of hash, have it as a treat every now and then. It is so potent that using it frequently will most likely make your enjoyment of flower go down. I enjoy hash as much as the next guy but after a rough day it still does not get any better than having a friend twist up a fat spliff that the two of you can share.

Chris Fisher
Chris grew up in Dover, Delaware with his sights set on the wild west. Inspired by 80’s and 90’s- era ski movies Chris found his way to Gunnison, Colorado in 1999 to attend Western State College, now Western State University, and to ski Crested Butte. In this little mountain town in the heart of the Sangre de Cristo mountains Chris also found a lovely little plant called cannabis. Chris still lives in Colorado, having moved to Fort Collins after graduating to follow his love of skiing, mountain biking, and all things outdoors. Currently working as a budtender with 7 years experience in the cannabis industry Chris has a passion for cannabis, a desire to write, and a love for Colorado.
Tagged: #710#bubblehash#Cannabis#cannabisoil#concentrate#confessionsofabudtender#dabs#extract#hash#kief#LeafoftheWeekaboutboulder