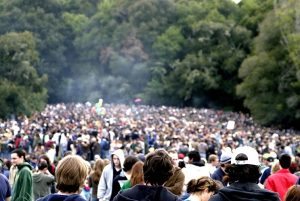 Well, it is that time of year again. It has been on everyone’s minds for the last few weeks. Nobody is sure what to expect but they all know it will be good. Ski season has ended, summer is on the horizon, and our annual April event is about to kick off. Vin Diesel and his buddies are back at it with another installment in the Fast and the Furious film franchise. Hahaha just kidding. Happy 420 everyone! I must say though, the correlation between the rise in April 20th celebrations and the comeback of Vin Diesel is an interesting connection that should not go unnoticed. If you work in the weed industry though, you know what I am talking about. It is the day we plan for and talk about all year. It is the day we all kinda dread working. It is the day you check on the calendar a few months ahead of time to see if you are scheduled to be there. It is that day that all of a sudden became an annual holiday? It is the day that weeds out (pun intended) the good budtenders from the not so good budtenders. It is the day of no lunch. It is the day when the men become the boys, wait… Can we just get this day over with?

Do you have plans for this week’s big holiday? I sure do, I will be working. If you do not work in the weed industry though you are probably counting the days until this Thursday. The twentieth of April, or 420, is a day for stoners and weed lovers around the world to celebrate all things cannabis. It is the day for hookas, cross joints, and pot brownies. It is the day when stoner movies are actually funny and seem to make sense. Vin Diesel again. It is that day in the middle of the week when you bail on your responsibilities to go smoke weed in the park with five thousand other avid stoners to fight for legalization.

How funny is it that we have a holiday that is based on our love of smoking weed? Que divertido, as a friend used to say. We are humans though, our holidays are based on the things we love, so why not add a new one for the ganja. Now all that is left is to push for the states to allow April 20th to be designated a holiday so we stop getting those looks from our bosses when we ask off from work. “No way sir, it is not about weed, I am planning on going to a celebration of life at Red Rocks, and yes Cypress Hill is playing but…”.

I do have a question regarding this holiday though, why does it exist? Obviously, because weed is fun and celebrating the existence of weed with your pals is totally fun. The twentieth day of April is not known to hold any religious significance though, nor would it be considered a harvest time outdoors. It is also not a day where we have commonly observed any customs, and then everyone and their brother seems to have a different legend of 420 origin story if you ask. I was told once it is the police code for a marijuana bust. The first time I ever heard of 420 I was seventeen and some less-than-intelligent kids I went to school with thought it would be a clever idea to spray paint 420 all over our high school as a prank. However, I also read a High Times article around the same time that discussed a group of friends from California who, in the 1970’s, had band practice every day after school at 4:20 pm. They would meet for practice and get stoned first. This is the one I like, but every year on April 20th some publication will have a new argument regarding the history of 420, whether it relates to The Grateful Dead or even H.P Lovecraft. In truth, the real reason was probably lost in a seedy lid of gravity bong smoke and some loud chortles, a faded memory nobody has an answer for.

For most people, April 20th is just another Spring day of blazing in the sun after a long winter inside, not for me though. 4/20 has become the international day of smoking weed. As a budtender, it is basically Black Friday minus all the fighting and hatred from customers. It is the bizarro Black Friday. Luckily in this retail business, there is no fighting, it is full of patience and funny jokes, stoners are not particularly the aggressive type. Occasionally you get some weirdos but that is natural, and they just tend to make the day a little more interesting. People do want their weed though and I will be lucky if I get a chance to sit down for a lunch break at all that day. Please, if you are a customer that day take it easy on old Chris, maybe read some of my previous blogs to catch yourself up on the different products that the dispensaries offer so that you are moving through the line quickly. Do not concern yourself with getting in early unless you want to start celebrating early, we will have plenty. The last few years there have been people clamoring at the windows in the morning like zombies to get weed, I mean we do have a strain called Cosmic Brain, but it can get ridiculous. We will have weed all day bro. Having said that, the patience that exists in a cannabis dispensary is a thing of beauty, rarely can so many people wait in a small area with smiles on their faces for at least an hour. Hey, I guess when you consider the alternative, anything is better than waiting for weed outside of your weed dealer’s bedroom, trying to act totally normal every time his mom walks by with a clothes hamper. Countless times have I apologized to people that had to wait and I have never actually felt that anyone is upset. Stoners are a patient lot but they do want their weed. So, no need to rush in, it is not a day anyone plans on running out of weed. Most places probably stocked up on enough merchandise that it will still be on their shelves until summer. Happy 420 everyone! Enjoy your holiday and remember to be kind to your budtenders.

Chris Fisher
Chris grew up in Dover, Delaware with his sights set on the wild west. Inspired by 80’s and 90’s- era ski movies Chris found his way to Gunnison, Colorado in 1999 to attend Western State College, now Western State University, and to ski Crested Butte. In this little mountain town in the heart of the Sangre de Cristo mountains Chris also found a lovely little plant called cannabis. Chris still lives in Colorado, having moved to Fort Collins after graduating to follow his love of skiing, mountain biking, and all things outdoors. Currently working as a budtender with 7 years experience in the cannabis industry Chris has a passion for cannabis, a desire to write, and a love for Colorado.
Tagged: #420celebration#Cannabis#cannabisculture#cannabisindustry#confessionsofabudtender#GreenThursday#hybrid#LeafoftheWeek#weedblog420aboutboulderbudtenderdispensaryindicaMarijuanasativa