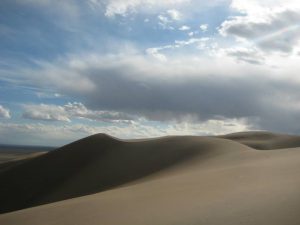 You might want to start planning trips to visit Colorado’s National Parks. Rocky Mountain, Mesa Verde, and Black Canyon of the Gunnison are must-do’s when in Colorado, but the Great Sand Dunes is often overlooked. It’s our small but mighty National Park, and well worth a visit.

It may not look like much from the highway, but once you hike over that first ridge of sand, you’re engulfed by the enormity of the place as you gaze out over 30 square miles of sand, with dunes rising as high as 755 feet. The Sangre de Cristo Mountains serve as a grand backdrop and provide a mythical ethos, shrouded in legends of lost explorer s and hidden treasure. 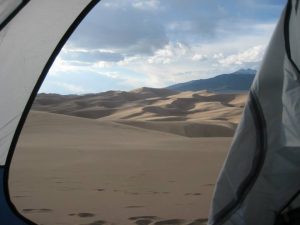 Roaming the dunes will make you feel like you’re in another world, but it’s also exhausting! Many overconfident hikershave gotten dehydrated or lost over the years, so keep your wits about you and carry plenty of water. In the warmer months, Medano Creek runs between the dunes and the main parking lot and is a great spot to cool off. If you want to try something really unique, rent a sandboard or a sled and glide down the slopes. Yes, it’s a real thing, and it’s completely encouraged in the park!

Finally, there are plenty of camp grounds and lodges in the area, but I would personally recommend camping on the dunes themselves. Out of the nearly fifty parks I’ve camped in, this was by far 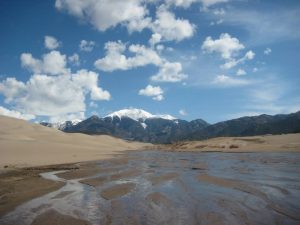 my favorite. All you need is a free backcountry permit from the visitor’s desk. You can set up anywhere you’d like over the first ridge, and given the size of the park, you’re not likely to have tons of hikers trampling through. Once the sun goes down, you can hear the elk in the distance, and the stars are so brilliant you may not even need your flashlight.

So, go enjoy our National Parks, be safe, and be respectful!

Evan Meyer
Evan is a writer, filmmaker and animator from Illinois. She moved to Boulder in 2011 to study film at the University of Colorado and fell in love with the Rocky Mountains. After graduation, she moved to Austin to pursue her film career. Despite the amazing tacos, music, and people, she found herself homesick and moved back to Denver, where there are far fewer cockroaches and seasons are an everyday occurrence. She is still writing screenplays and animating her own short films, and spends the rest of her time exploring new trails, towns, restaurants, and slopes all across the state.
Tagged: campingNational Parksspringsummerweekend trips