Francine Campone was born in Brooklyn, New York in the 1950s and lived in New York City until 1992. Her grandparents—a seamstress and a tailor—taught her how to sew, and her mother taught her how to knit. She used these early lessons in the intended utilitarian ways until, a few years ago, she encountered Debbie New’s Unexpected Knitting. That introduction, followed by Knitting Art, by Karen Searle and Experimental Textiles, by Kim Thittichai, opened her eyes to new possibilities for stitch. Campone is on a self-directed journey of learning in this new arena, through workshops, studying the work of others, and fiber experiments of her own. One of these ventures, Deus Ex Machina, an icon constructed of knitted computer cables and broken diskettes, was shown in the Trashion show at Tactile Gallery in 2011. Koan 1, was shown at The Center for Visual Arts in 2014. Campone is part of the artist community at GRACe in RiNo and an artist member of RiNo, as well as Westwind Artists. Every project brings new opportunities for learning and she approaches the materials as kōans to be explored and understood. 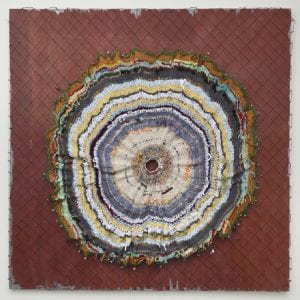 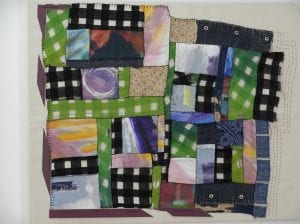 The Work of Art is Never Done 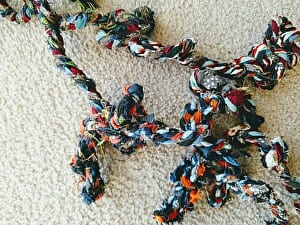 Campone is currently working on two very different projects. One is called Samsara and is based on the idea of intertwined stories. It began as a way to use scraps of discarded fabric and worn out clothing. She cut the fabric into strips and began making a long braid. From this, she expanded the idea to involve contributions from other artists and the public. The braid will continue to grow and incorporate more and more stories into the final, gargantuan braid. Campone invites you to send her a garment, share your story, and become part of the project yourself. 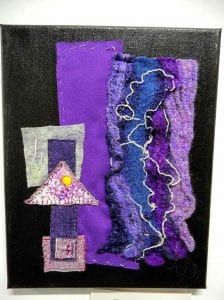 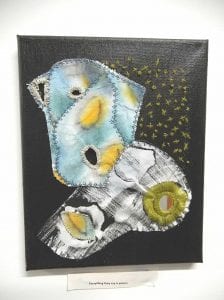 Everything They Say is Poison 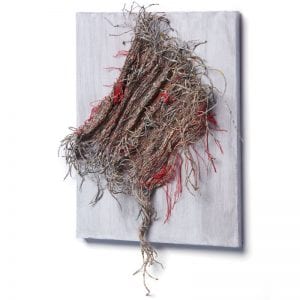 Black and White and Red

The other is a series titled, Identity. It revolves around the idea of identities and how we create and wield them in our daily lives. These works resemble shields, three dimensional and almond shaped, painted with elements of newly imagined archetypes. One is called Identity #4: Eco/Techno Warrior, and includes things like seashells, and nature symbols, alongside wires, and circuit boards. Another, called Identity #2: Girl Boy Boy Girl, is adorned with male and female symbology, and small objects associated with traditional gender roles.

You can see more of Campone’s work at her studio at GRACe, online at https://www.wabisabistitches.com/, or on Instagram @francinecampo.

Jared Herzing
Jared is a local content contributor and aspiring author. He was fortunate enough to grow up in Golden, Colorado and graduated from MSU Denver. While an insatiable love of travel lures him all over the world, his roots remain firmly planted here. He enjoys writing short stories, poetry, children's books, societal observations, and everything else. A nature enthusiast and sunshine connoisseur, Jared is perfectly at home on any mountaintop or patio. He frequents art galleries and concerts, poetry readings and breweries, museums and bookstores. When he isn't making neighbors cringe at his musical attempts he can be found on a snowboard or sailboat, depending on the day. A perpetual adventurer and eternal patron of the road less traveled.
Tagged: