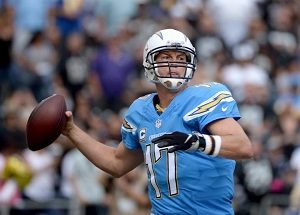 While the Denver Broncos try and decide whether Trevor Siemian or Paxton Lynch should start at quarterback in 2017, the smart play is for John Elway to roll the dice again on a 35-year-old veteran to save the day. Long before Siemian and Lynch were in diapers and throwing tantrums, Phillip Rivers was in the NFL throwing touchdowns. With an elite defense and Super Bowl aspirations, Denver can’t afford growing pains. Here are five reasons that Phillip Rivers could transform the Broncos into a Super Bowl contender.

1) It takes about five years of experience to really excel at the quarterback position. While most quarterbacks enter the league with a certain skill set, it takes time to develop in areas such as pocket awareness, reads and progressions, developing a quick release, and learning the multiple schemes that defenses throw at you. Siemian or Lynch may eventually get there, but Rivers has been in the league for 14 years and has seen it all. With Darrian Stewart, T.J. Ward, Emmanuel Sanders, and Demaryius Thomas all entering their 8th season, and Aqib Talib beginning his 10th, Denver can’t afford to wait.

2) The Los Angeles Chargers may want to unload him. Rivers is 35-years-old and despite his 33 TDs and 4,300 passing yards last year, the Chargers only went 5-11. With a new location and the effort to build a fan base in Los Angeles, the Chargers could be looking to the future, not the past. There are a couple of talented quarterbacks coming out of college next year and Los Angeles would love to see local products Sam Darnold (USC) or Josh Rosen (UCLA) at the helm to help sell tickets. The Minnesota Vikings traded for Sam Bradford last year, giving up a first and a fourth-round pick, so figuring out the market price shouldn’t be difficult if the Chargers are willing.

3) Rivers may want to come to Denver. Unless Rivers plans to drive two-and-a-half hours (five with Los Angeles traffic) from San Diego to LA each day, he’s already packed. Denver has a top-notch defense, Pro-Bowl receivers, and a familiar Mike McCoy, his old coach and current offensive coordinator, running the show. Having not made the playoffs since 2013, and with the chance of a ring and cementing his place in history, it would be hard to say no if Elway picks up the phone.

4) 35 seems to be the new 30. Tom Brady is 39, Drew Brees is 37, and Ben Rothlisberger is 35. Rivers has played 176 straight games, and with his pocket presence, short release, and veteran poise, he could play five more years. Rivers would make our offensive line better with quick decision making, help keep our defense off the field, while forcing opposing defenses to play us honest, instead of stacking the box and daring us to go deep.

5) It worked last time. As I recall, John Elway convinced another 35-year-old, future Hall-of-Famer, to come play for the Broncos a few years ago, and that didn’t work out too bad.

Alan Tapley
Alan Tapley is an educator, author, and blogger who has lived just outside of Boulder for the last twenty years.  His published work includes two novels, two children’s books, a series of cartoons in the Minneapolis Star-Tribune, and multiple sports related articles. His love for family and the state of Colorado is only matched by one thing, his passion for sports.  The first baseball game he ever attended was at Wrigley Field, before there were lights.  At the final Bronco game at the old Mile High, he allegedly cut out a piece of his seat in the South stands.  But regardless of being here for the Avalanche’s last Stanley Cup, the Rockies only World Series appearance, and all the Broncos’ Super Bowl Victories, his wife never fails to remind him that he wasn’t at the University of Colorado in 1990, like she was.  The year the Buffs football team won the National Championship.
Tagged: Aqib TalibBen RothlisbergerDemaryius ThomasDenver BroncosDrew BreesEmmanuel SandersJohn ElwayJosh RosenLos Angeles ChargersMike McCoyNFLPaxton LynchPhillip RiversSam BradfordSam DarnoldSan Diego Chargerssuper bowlTJ WardTom BradyTrevor SiemianUCLAUSC