Colorado’s newest resident! Meet Amarok, a 3-year-old  Timber wolf who was recently rescued from the streets of Medellin, Colombia. Amarok was found roaming the streets of Medellin and was subsequently rescued by the Santa Fe Zoological Park. The park contains more than 1,000 animals from the Americas, Africa, and Asia, yet Amarok was the first wolf ever to be taken in at Sante Fe. As wolves are not native to Colombia, the zoo suspects he was the victim of the tragic illegal wildlife trade (a billion dollar industry that spans the entire world). Due to the zoo’s lack of resources and experience to give Amarok the right habitat and living conditions, they began searching for a new home for him.

Enter the Colorado Wolf and Wildlife Center in Divide, Colorado. CWWC is a wildlife sanctuary 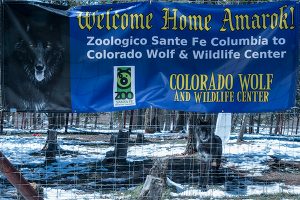 specializing in wolf conservation, education, and preservation, however, their work doesn’t stop with just rescuing these animals. CWWC is also an SSP (Species Survival Plan) and one of the few sanctuaries in the United States which has been certified by the AZA (Association of Zoos and Aquariums). This means CWWC works with zoos to increase genetic diversity of endangered animals, one of the major hurdles in reintroducing these species back into their native habitats.

The Colorado Wolf and Wildlife Center was excited about the opportunity to rescue Amarok and worked rigorously to overcome language barriers, international shipping laws and logistics, and countless other hurdles to make this a reality. Amarok traveled from Medellin, Colombia to San Salvador, to Houston, and finally to his new home here in Colorado.

The excitement in the voice of Darlene Kobobel, founder of CWWC, was palpable as she explained Amarok’s first snowstorm. “He was running full blast, jumping, and biting the snow…you could see the smile on his face!”

While Amarok is still adjusting to his new home (as he just arrived a little over a week ago), he has a number of opportunities ahead of him! Amarok’s 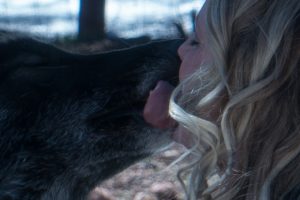 wonderful personality and heart-wrenching
story makes him perfect to become a key educational ambassador for wolves and the illegal wildlife trade. While his life certainly hasn’t been easy, with the help of the CWWC, he now has the opportunity to educate thousands of people about preconceived misconceptions around the species and will give a voice to the millions of animals who have fallen victim to the illegal wildlife trade. Amarok has yet another exciting adventure ahead of him, as he is set to be integrated with a female wolf at the center, and the whole process will be broadcasted via webcam!

In my opinion, touring the Colorado Wolf and Wildlife Center is the #1 attraction in Colorado, and I urge everyone, no matter your age, to set up a tour and see these incredible animals, I guarantee you’ll leave with a whole new understanding of wolves! To find out more information about the CWWC and to schedule a visit, go to wolfeducation.org and like them on Facebook. 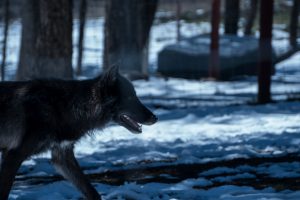