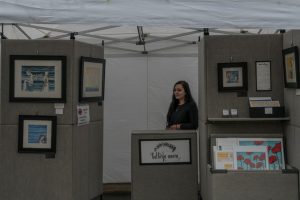 Kathryn is an artist from Anchorage, Alaska. She arrived in Denver yesterday and has already been amazed by the ever-changing weather for which Colorado is known. Kathryn was surprised by the size of Denver but has enjoyed the people, saying they seem “very outdoorsy,” which reminds her of home. While she’s just starting to get to know the city, Kathryn has been a bit overwhelmed with the driving here, as Denver’s road systems are significantly more complex than those of Anchorage.

While Kathryn has no formal training in art, she has been practicing as long as she’s been walking. A teacher in High School pushed her to learn watercolor, as she thought it was the hardest medium, Kathryn fell in love with the process and has since specialized in watercolor and ink paintings. Many of her pieces are inspired by “nightmares and fears,” allowing her a release as she deals with pressures, stresses, and crossroads in her life. Kathryn says one of her favorite parts of her work is “while there are negative things in her life that may have inspired them, people can draw beauty and peace from them.” Clearly, the creation of a piece is a very intimate process for Kathryn, so she is working on talking about the meaning of the pieces to strangers.

In addition to exploring Denver’s food scene, Kathryn will be showcasing and selling her work at the Denver Arts Festival (booth #134) today and tomorrow, and the Peoples Fair (booth #32) next weekend. Stop in and say hello to Kathryn and check out her gallery at amorartisgallery.com! 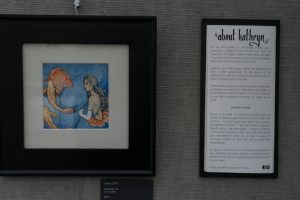 Colin Murchison
Colin is a Denver Metro native and avid adventurer. Whether he’s climbing volcanoes in New Zealand or exploring Copper Mountain's glades on his snowboard, you can always expect two things from him, a camera in his hand and a willingness to stop and have a good conversation with just about anybody. Colin studied at 4 different colleges/universities in pursuit of his finance degree; however, he’s adamant that the most educational experience he ever went through was living in a van in a foreign country for half a year. That's where his career trajectory changed radically as he discovered his passion for environmental sustainability and photography. Colin is now a media consultant and digital content creator, hoping his work will inspire others to get out, explore the world, and find ways to minimize their impact on the environment. To see Colin's personal work, visit his website: colinmurchison.com and Instagram: @colin_murchison
Tagged: AlaskaamorartgalleryanchorageartDenverdenver arts festivaldrawfestivalinkkathryn morinpaintpeoples fairwatercolor