I don’t have a child, but I do have an obnoxious dog, which often seems equivalent to me, even though I can hear all you overstretched parents out there screaming into your computer screens that a dog is nothing at all like a child. I hold my line on this because, while I think that my dog is the most adorable entity in the universe, I recognize that other people do not find my dog even remotely appealing, and this seems like the same cognitive dissonance that parents of tiny humans must embrace.

At any rate, I am always delighted to find places that I can bring my dog along with me, which is still not super easy to do, even in Colorado, where dog-ownership is both tantamount to proof of citizenship and the signifier of a sound and hygienic moral constitution. The Colorado Sake Company is a verified dog-friendly establishment that also happens to be comedian-friendly. It’s little wonder then that I found the place full to the brim with both comics and canines this past weekend. 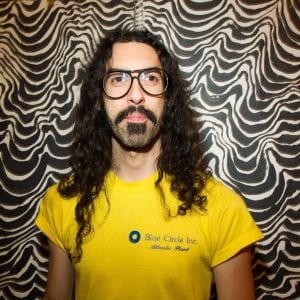 The show is run by Anthony Kapfer and Ben Kronberg, both of whom have made conscious choices about eschewing barbers. It takes place in the Denver Comedy Lounge in the back room of the Sake Company, where a bar serves sake and a collection of folding chairs stares at the requisite solitary microphone. The biggest departures from the usual comedy-venue fare were a) the generous and tidy bathroom (Dry floor! Ample toilet paper!) and b) the utterly charming, bristly-faced hound named Merle who welcomed all comers with a wag and a smiling snout. 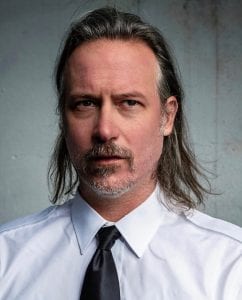 I had invited my friend to come along, ostensibly for social support, but really because I need four hands to handle my obnoxious dog in public.  I also packed a knapsack of treats, a water bowl, chew toys, an extra jacket (my dog is skinny and shivery), and a bonus leash in case he chewed through the original. Now tell me again how different parenting is than dog-minding? I don’t want to think about explaining this hopelessly-hipster process to my working-farm grandparents.

There’s an irony in going to see a stand-up show where I spend most of my time trying to get my dog to sit down. Turns out, dragging your dog along to public events is kind of a pain in the neck, and so most people don’t, even when they can. I saw four doggos out amongst the 50 or so humans in attendance that night: Merle, the matriarch, who belongs to Kapfer and his girlfriend; my own little weirdo; a French bulldog; and a Chihuahua bundled up in someone’s arms. (Note: I dislike Chihuahuas intensely—there’s no reason to publicize this statement other than that I want to.) The pooches all were quiet and well-behaved. My hound howled along a bit during one of the songs, but he seemed to get a better reception than the written material, so make of that what you will.

This dog-friendly show got started this summer when Kapfer, then on tour, did a gig in the venue and fell in love with Merle’s owner. After all, any woman who owns a dog like that must be a pure and noble soul. Long story short, he moved here for the love of a lady and a pooch, asked the venue owner about doing a show, invited his old buddy Kronberg to on-board, and the Denver Comedy Lounge was born. I should point out that Kronberg does not have a dog, but despite that lack of virtue-signaling, he is still probably not a morally-bankrupt serial killer. There *are* some good men who don’t have dogs, but their online dating success is at least one standard-deviation from the dog-owning mean.

Kronberg, who looks like Steve Jobs had a baby with William H. Macy on Shameless, opened and hosted the show, doing a bit that included rapping, which is a bold gambit for any white man over 40 (really, for any white guy) and it worked. I mean, it wasn’t Eminem, but hey, I’m not Ingrid Bergman, either. As Kronberg himself said, “How many “sake” jokes did you write today that worked?” None, but I drank some sake and it was delicious and strong enough that I dare not have a second before driving home.

After Kronberg, Kapfer, who looks like Weird Al Yankovic had a skinny baby with Frank Zappa, took the stage with his worn guitar and proceeded to sing a comedic song entitled “Comedy Songs Aren’t Funny,” which I mostly have to agree with, and not because Kapfer doesn’t write good comedy. He does. To get nerdy about it, though, comedy songs are damn hard to win because the repetitive structures of most music (think “verse verse chorus/verse verse chorus”) forces the singer to say the surprising punchline (the chorus) multiple times, which almost never serves the joke. (You could think of the verses as callbacks, which are a classic building block of comedy, but the audience sees the next verse coming and you then lose the power of surprise in eliciting laughter.) Also, timing and pacing are everything in comedy, and music rarely enhances either one. Thanks for sticking with me on that deep dive that explains why my howling hound (a surprising element in the song!) got a bigger response than the human.

All in all, comedic-song nerdery aside, I enjoyed watching the openers. They clearly had a professional’s level of comfort being on stage and were enjoying themselves, which makes it easy for the rest of us to enjoy watching them. Here’s a little unsolicited advice from an armchair quarterback of comedy: if you’re going to do an ongoing comedy show in a sake house…maybe try to write some sake jokes that *do* work? 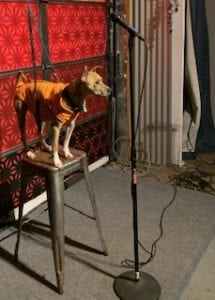 The headliner for the evening was Derrick Stroup, a blocky Southern transplant who won the Comedy Works New Faces Competition and has a lot of things to say about being a non-native Coloradan. It’s a good bit. The energy and topical nature of the comedy works well. He talked a lot about dogs, which was funny, and a bit about weather, which was not as fresh, and then finished with the stuff that really works: the personal and revelatory. Comedy is about creating intimacy with the audience and there is no intimacy without vulnerability. Personal confessions often make for the best humor.

So to finish, here’s my personal confession: I really had fun taking my dog to a comedy show! The oddity of having a bunch of dogs listening to jokes made the show lighthearted and just plain fun! If you’re not driving, drink that second sake and you’ll be a Fun Level III. All the shows at the Denver Comedy Lounge are dog-friendly at this time (for friendly dog, of course); pack up your puppy and wag your tail with a bunch of other sanguine-souled Coloradans.

Jessie Hanson
Jessie Hanson lives and works in Denver and couldn't be happier about it. Like the best-possible kind of Jekyl-and-Hyde scenario, she splits her life between science and storytelling. During the day, she performs clinical diagnostics and messes around with test tubes. At night, she performs behind the mic as a standup comedienne, in the air as a circus aerialist, and in rhinestones as burlesque dancer. She begrudges the hyper-inflated cost of a decent pair of false eyelashes. When she's not on stage, she sweating it out as an endurance athlete in triathlons and marathons across the West. She begrudges the hyper-inflated cost of a decent pair of running shoes. She's thrilled to be on board with OnDenver and writing about science, comedy, circus, athletics, and general fun on the Front Range!
Tagged: brewhousecomedycraft brewDog Friendlydogssakestand up