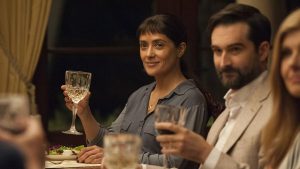 I know you. You probably don’t go out to the movies much. Assuming you take out a second mortgage to pay for tickets and restrain yourself from murdering the jackass who simply must Snapchat through the film, what would you possibly want to see, anyway? The summer is a cinematic wasteland, populated with superheroes, explosions, and fart jokes. So you stay home. You’re disappointed that there aren’t actual movies with actual plots and characters. This is the proof positive that they don’t make ’em like they used to.

Only they still do. They never stopped. You might think that independent cinema is in a death spiral, but it’s not dying, it’s just changing. While the major studios sink more money into franchises and cinematic universes, smaller production companies are still out there, still plugging away. Some of them partner with streaming services like Netflix and Hulu, so you can enjoy a sophisticated film at home. Others, through the kind of brute persistence a cockroach would admire, manage to drag their films into honest-to-God theaters.

Only you don’t show up. Not nearly often enough. Hey, I don’t blame you. It’s a pain in the ass to drive to the theater, find parking, and go through the whole rigamarole. If you want films with a point of view and something to say, you need to support them, even if the point of view is one that might make you a little uncomfortable. As noted philosopher Martha Stewart says, that’s a good thing, because increased exposure to different points of view makes us smarter and more empathetic.

Is there a place for empathy any longer? Especially in the United States? Miguel Arteta and Mike White certainly think so, and their newest film Beatriz at Dinner is an examination of empathy in the foul age of Trump, and it gives us a knockout performance from Salma Hayek.

Beatriz (Salma Hayek) is a holistic masseuse. She lives in a modest house in Los Angeles, with two yappy dogs and two bleating goats. Make that one goat, because someone has strangled the other one. She knows she’s not supposed to have the goats, the neighborhood isn’t zoned for them, and her aggressive neighbor has complained about the noise. But she loves them, so what is she supposed to do? She usually works with clients at a cancer clinic, though she’s willing to make house calls.

One of those house calls is for Cathy (Connie Britton). Her daughter had cancer as a teen, and Beatriz’s treatments were nearly miraculous. On a regular basis, Beatriz drives her wheezing Volkswagon to Cathy’s Newport Beach mansion for massage treatments. Things get complicated when Beatriz’s car dies, and her mechanic friend can’t make it until morning. Cathy is hosting a swanky dinner party, and she impulsively invites Beatriz to stay for dinner. Her husband Grant (David Warshofsky) doesn’t care about Beatriz, her car, or her problems.

You see, the dinner party is actually a crucial business function. Junior associate Alex (Jay Duplass) and his wife Shannon (Chloe Sevigny) will be there. The more important guest is Grant’s boss, the amusingly named Doug Strutt (John Lithgow), a venal and narcissistic real estate developer. Strutt is accompanied by his third wife Jeana (Amy Landecker), and the three couples are celebrating the closing of a big deal in particular, and how great it is to be fabulously wealthy, in general.

Ordinarily, the evening would be spent with Strutt shamelessly bragging, and everyone else kissing his ass. Beatriz thinks she recognizes this man, however. Is he the man who promised the people of Beatriz’s Mexican village that his development would bring jobs and prosperity, but actually brought ruin upon them? Perhaps. When Strutt shows off a picture of a rhino he killed while on safari, things start to get interesting.

Based on the plot description, you might think Beatriz at Dinner is an obnoxious liberal fantasy, one in which a saintly immigrant engages in moral combat with a rich conservative. There’s a degree of that, sure. The filmmakers are after bigger game, and they have better things to do than getting into a political diatribe. The problem isn’t merely class, either, and it’s not simply a screed against the rich. Instead, this film examines a normal person like Beatriz coming into contact with a walking id like Trump and the sycophantic lickspittles surrounding him. People like that don’t value Beatriz, her experiences, or her empathy. To them, empathy is either a weakness or an amusing affectation, and the only place people like Beatriz have in their world is firmly under their boot.

Miguel Arteta is a bit of a journeyman director, with work in television, comedy, and independent film. His experience has taught him many things, including efficiency, and he’s able to establish tone quickly with a few lines and well-placed shots. He knows when to linger on Hayek’s face as she listens, and when to let the camera roam through the palatial mansion.

He’s worked with screenwriter Mike White on Chuck & Buck and The Good Girl, and White’s darkly comedic script meshes well with Arteta’s direction. There are a few times where things are slightly too on the nose as a metaphor for the current political climate. More frequently, he effectively taps into the friction between those who think our culture is moving in a purely selfish direction, and those who have the wealth and power to unleash their darker impulses at will.

The cast knows exactly what kind of film they’re making, and there’s not a single performance out of step. I enjoyed Jay Duplass’ thoughtlessly privileged Alex. Connie Britton’s Cathy is the kind of person who thinks she’s a good liberal and praises her daughter for meeting “the gays and the trans” at college. She means well, and she sincerely thinks Beatriz is her friend.  Most of these people think they’re open-minded, yet they don’t recognize the immense cocoon of wealth they live in. There are two characters who know precisely what they are, and John Lithgow’s Strutt is one of them. Lithgow has been appearing on screen since the 1970’s, and he’s earned his reputation for being one of our most versatile actors. He’s obviously based his performance here on our current President, and he adds a slight amount of humor that Trump doesn’t possess, a degree of “I can’t believe you’re letting me get away with this!”

Speaking of versatility, let’s talk about Salma Hayek for a moment. She’s appeared as a vampiric stripper, a legendary artist, a pitiless drug lord, and that’s just for starters. Do people appreciate how talented an actor she is, how much she can do with a look? As Beatriz, she gives one of the best performances of the year, and if she’s not nominated for an Academy Award, I say we just burn it all down. She’s usually a performer that can turn the heat on at will. Here, she’s like a placid lake, calm and cool. Some of the most powerful moments are when the camera focuses on her, and we see her facial expressions as she simply reacts to what she’s hearing, confirming what white society really thinks of people like her.

I grew up in Boulder, and as the years have gone on, my beloved hometown has transformed from an intellectual college town that embraced weirdness to an enclave for the rich, Beverly Hills by the Flatirons. The nouveau-riche don’t live amongst rabble like me. They live apart, above us, and in this new Trumpian age, they must decide if it’s better to throw in their lot with monsters or use their influence for the common good. Beatriz at Dinner isn’t a great movie. It’s a good one, though, and it has something to say about empathy, class, and the function of wealth in today’s America. If movies like this truly matter to you, do me a favor. Go see it.

Tim Brennan
Tim has been alarmingly enthusiastic about movies ever since childhood. He grew up in Boulder and, foolishly, left Colorado to study Communications in Washington State. Making matters worse, he moved to Connecticut after meeting his too-good-for-him wife. Drawn by the Rockies and a mild climate, he triumphantly returned and settled down back in Boulder County. He's written numerous screenplays, loves hiking, and embarrassed himself in front of Samuel L. Jackson. True story.
Tagged: amy landeckerbeatriz at dinnerchloe sevignyconnie brittondavid warshovskyjay duplassjohn lithgowmiguel artetamike whitesalma hayek